Riverside & a Rite of Passage

Some of you might remember that about 2 years ago I took my eldest son on his first bike trip. It turned out to be a life changing event. Not only did we forge a special bond on that trip, but it also turned a shy and unsure 8 year old boy with one friend into a confident person who believes the sky is the limit. The confidence he gained turned him into an achiever academically, socially and on the sports field.

So naturally, with my youngest being 8 years old at the moment, another trip was on the cards...

Waiting for the "perfect weekend" turned out to be an exercise in futility. So I decided that we'll just do it! This weekend. So the plan was set in motion. Riverside was the destination decided upon.

Since the decision was made earlier in the week excitement levels were off the charts.

The planning, the shopping, everything were done together. And then the day arrived. We were packed and ready to roll! 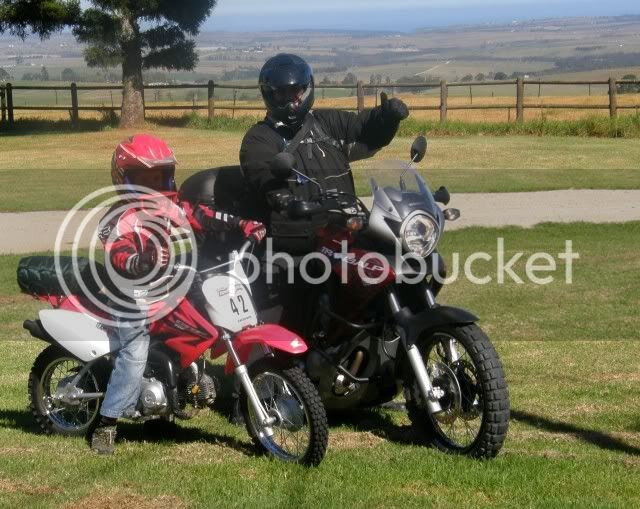 We'd follow gravel roads from the farm all the way to Riverside, a resort close to Klein Brak. Usually I'd favour a more remote destination, but due to outside factors we could only hit the road in the afternoon, limiting our options a bit. Our route for today: 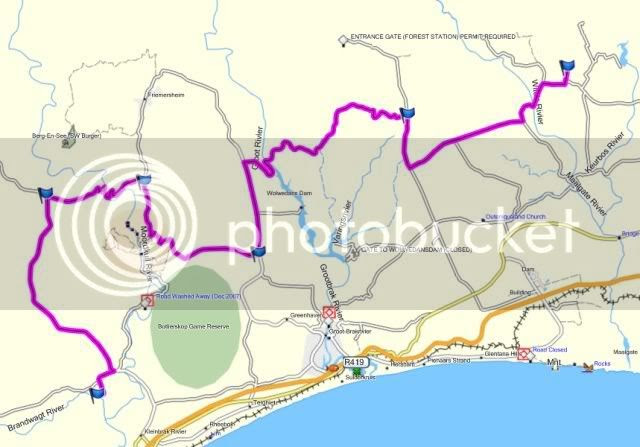 At this point I should mention that he'd be riding his brother's CRF70 - a bike he is not used to. I thought this bike a good choice for this trip because it has bigger wheels and better handling than the CRF50. The excitement of the past week was soon forgotten as nervousness took it's place. The going was slow as set off. 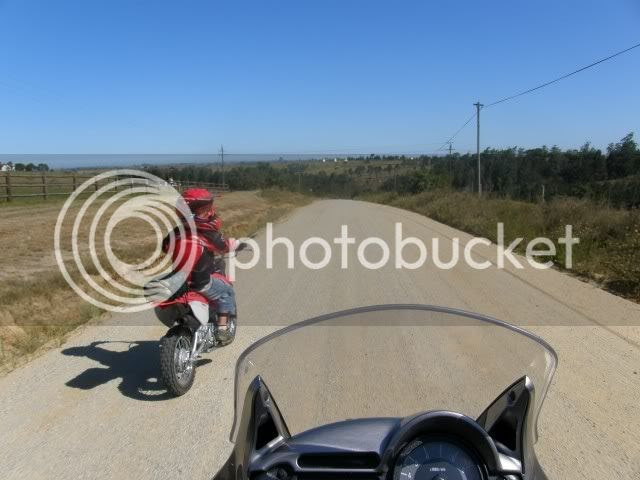 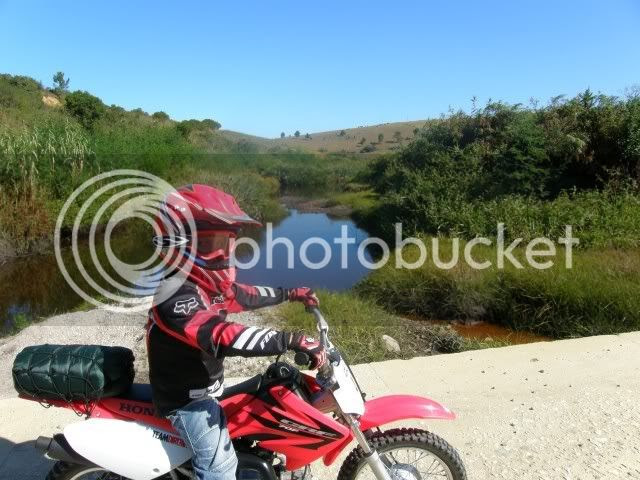 We'd stop every so often so I can make sure he's OK. He got into his rhythm pretty quickly though and speeds started to pick up to a brisk 40km/h 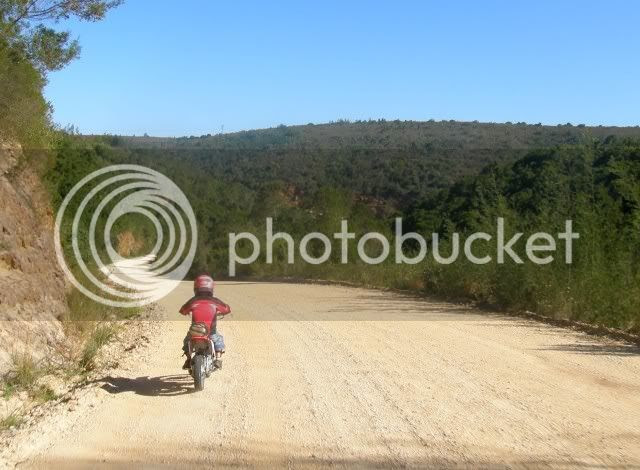 A snack stop at the Great Brak river. We had lots of supplies for our "Great Adventure". 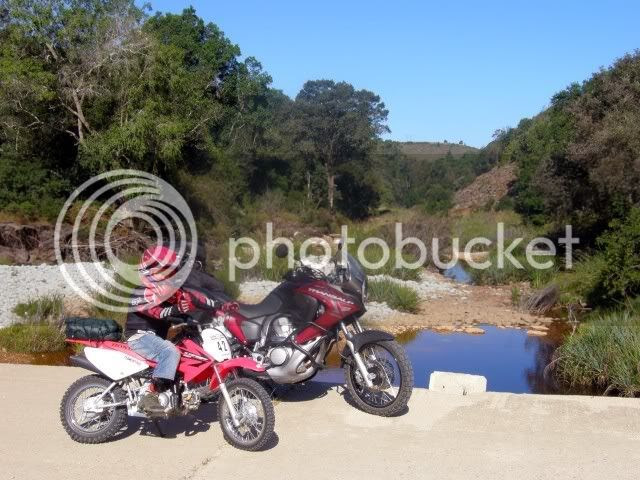 The going was good and we were travelling at speeds around 60km/h by now. He was really getting comfortable on the bigger bike and enjoying the trip.

We rode through the Botlierskop Game Reserve: 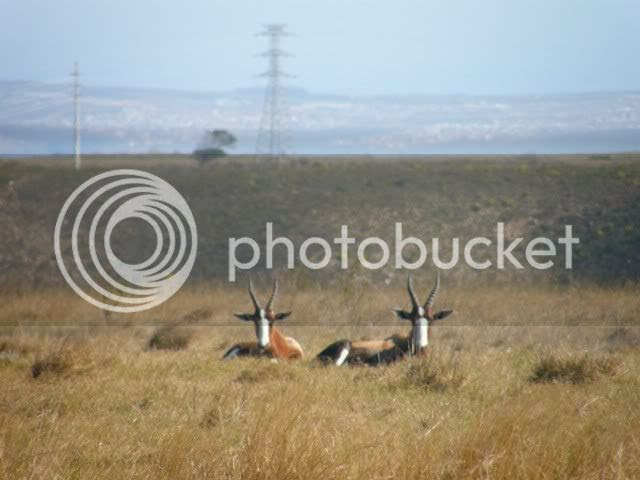 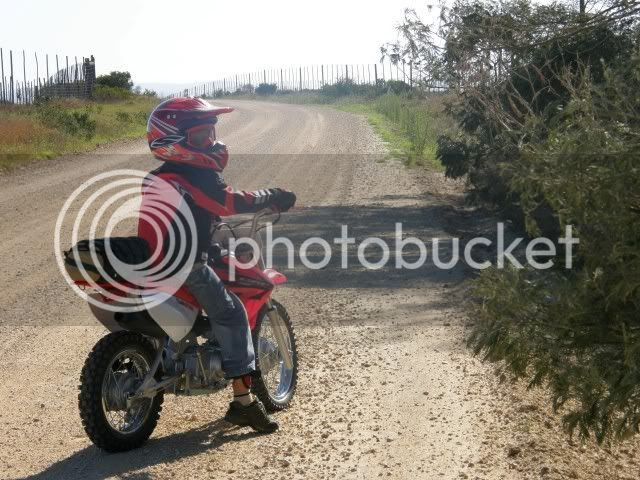 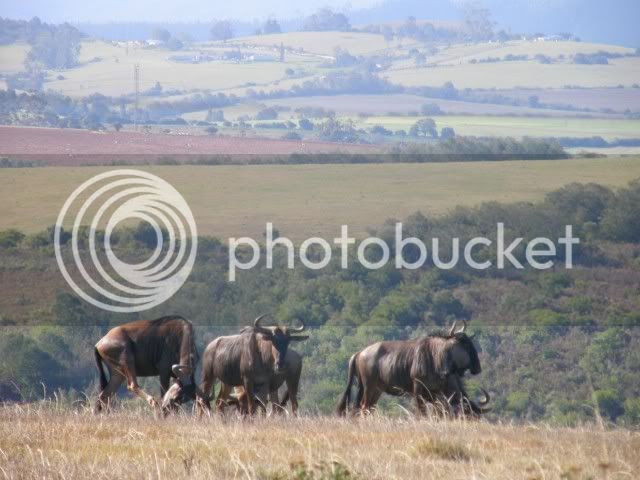 Another scenic stop at the Moordkuil River. What a beautiful area we live in. 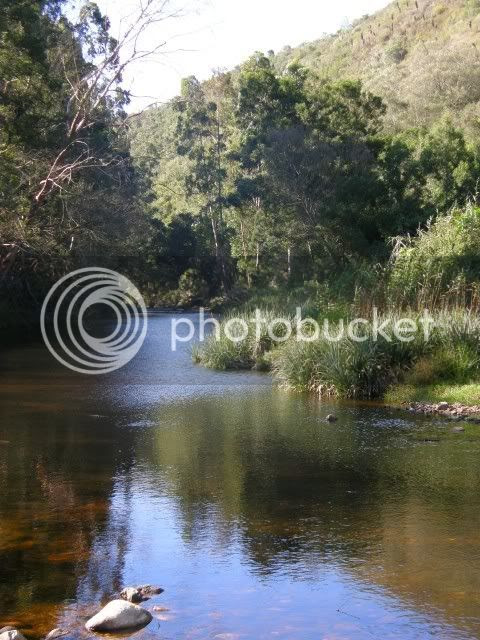 And eventually - our destination: 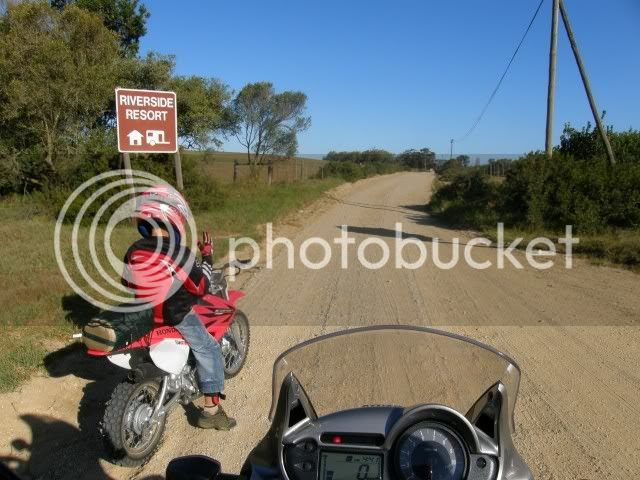 We settled in and pitched camp. He's made it! 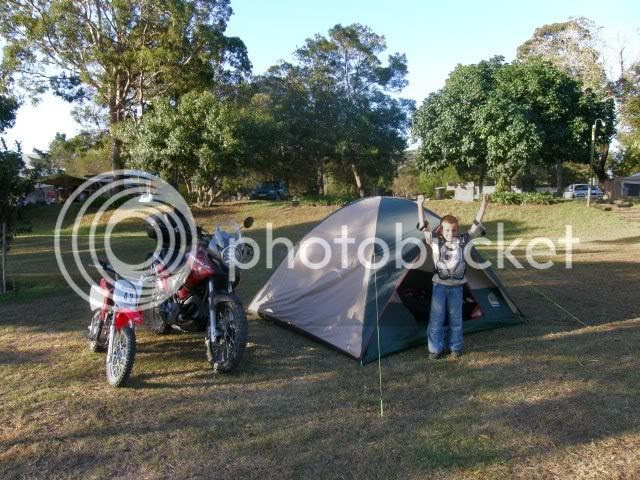 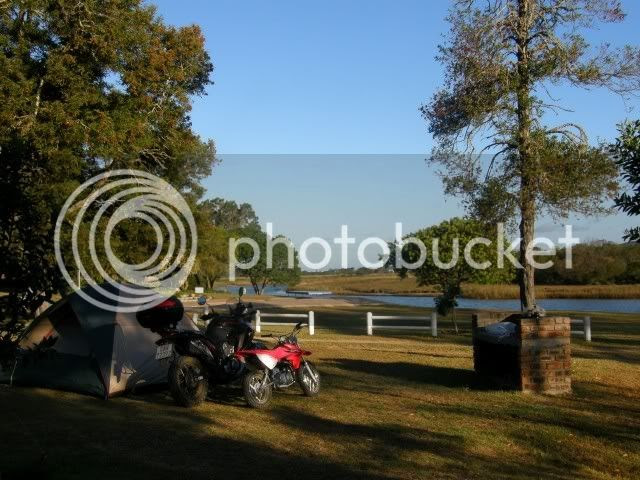 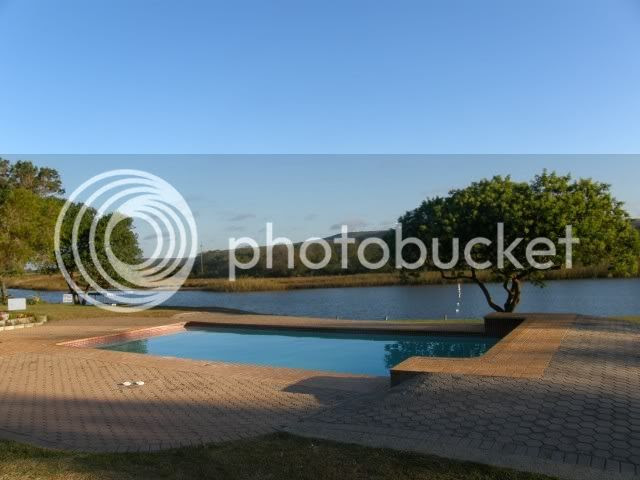 We brought a fishing rod with in the hope that we catch something for dinner. I have to mention here that we are not fishermen. We fish for Bass occasionally using lures and flies, but that is the extent of our experience. I was told that lures would not work here so we came prepared

We had a hook and a "dobbertjie".

What we did not have was bait and a sinker, so we had to improvise. 'n Boer maak 'n Plan!

We had 5 "mieliepitte" (cream style of course) as bait and a No.9 socket as a sinker. 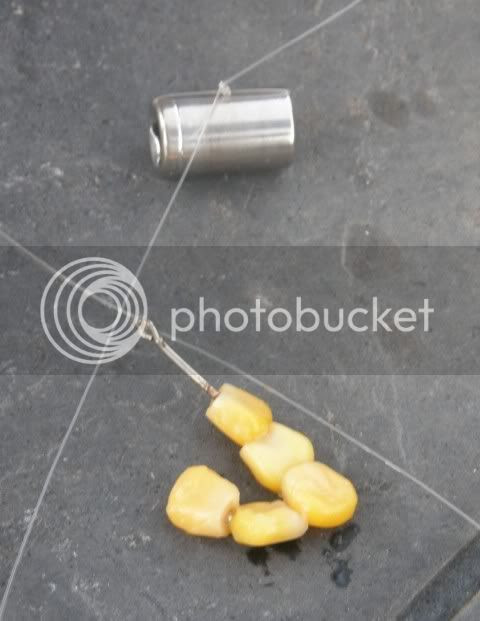 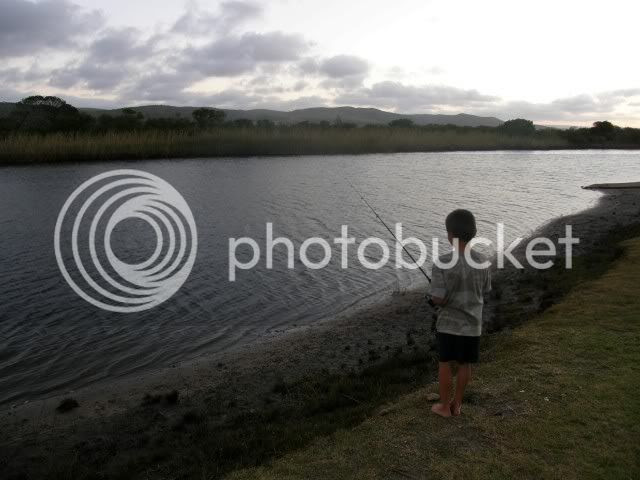 We did not get a single bite (as far as we know), but when we took the line out the "mieliepitte" were gone

Luckily we had Steak and Lamb-chops as backup.

After a nice braai (BBQ) we turned in and chatted till he fell asleep. 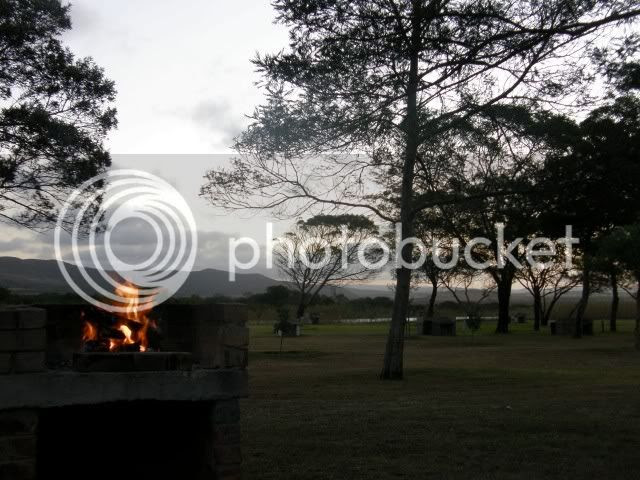 The next morning I had a new plan

The previous night I trimmed some raw fat of my T-bone to use as bait today. When we arrived at the river the other fishermen smiled and shook their heads. They've had no luck all morning using live bait. We had no chance...

As it happens we had some bites less than a minute after we threw in. We took the line out and saw that some of the fat had been eaten! We threw the line back in... Again we had lots of action, but the fish did not bike on the hook, so we took the line out again. Now we put a smaller piece right on the hook. This time, when we get a bite, we'd have a fish for sure! Then tragedy struck. As we threw the line back in the "dobbertjie" flew off!

The only one we had... We tried tying some wood and later some reeds to the line but it did not work.

Oh well, so much for our fishing career.

Unfortunately, in the excitement, we didn't take a single photo during the whole saga.

We broke up camp and said goodbye to the river. 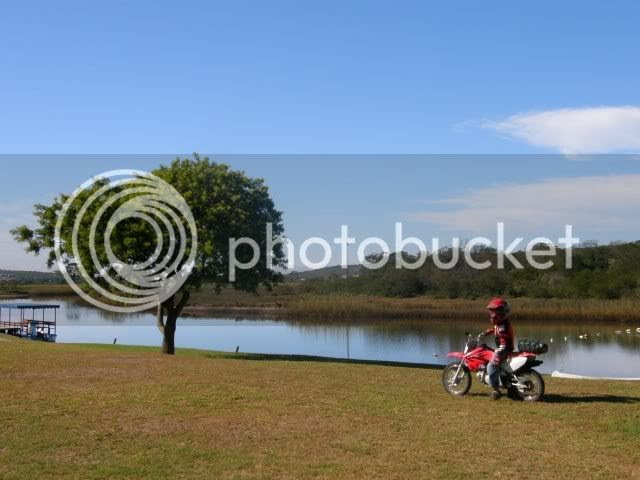 Hitting the road back: 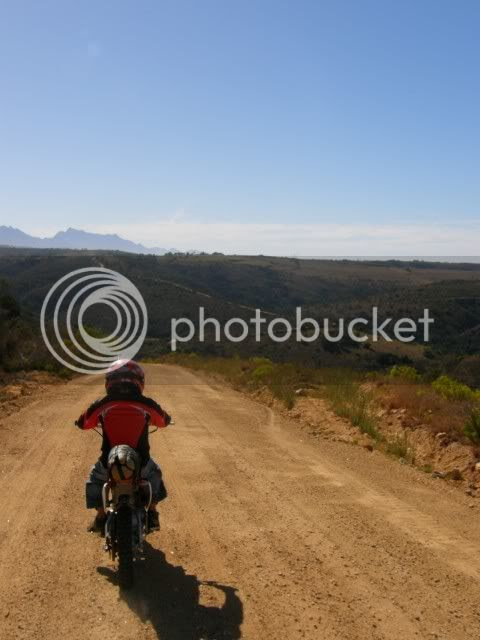 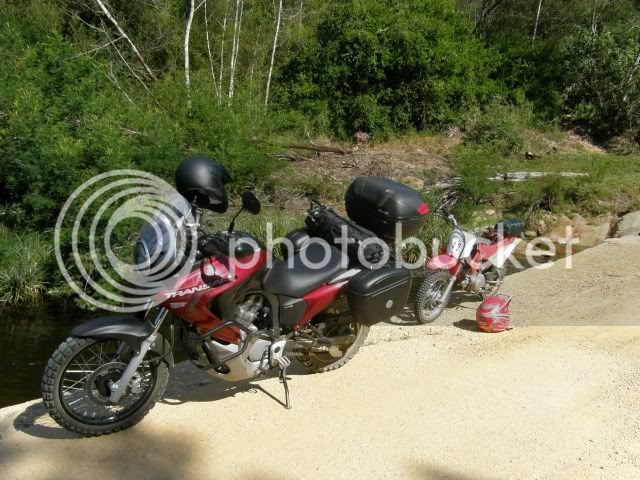 I really like this next photo. This was just a "snap" taken "in ride". What luck. Great composition for a "happy snap" 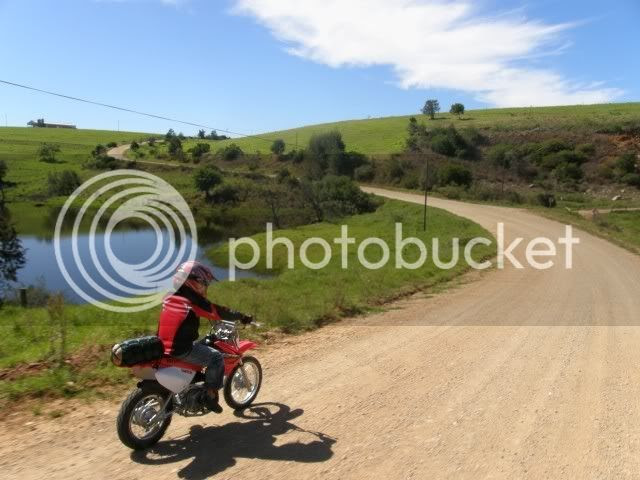 ...and arriving back on the farm in time for Sunday lunch. 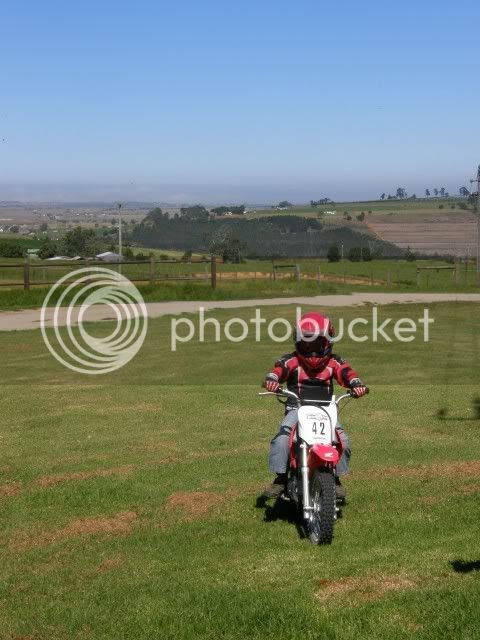 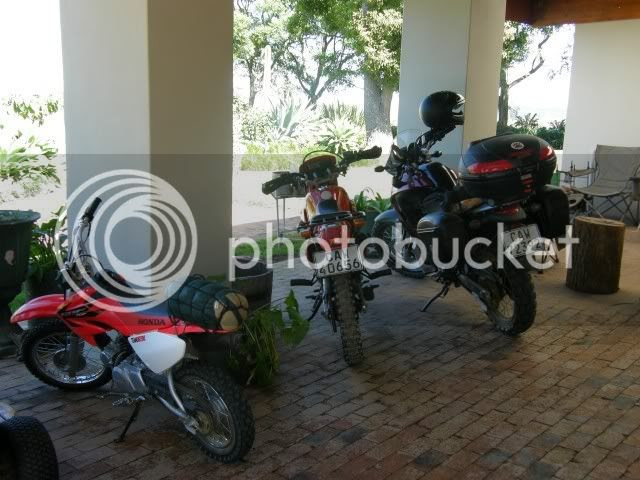 The trip did not disappoint. He's been telling every-one who cares to listen all about it. His teacher is going to have a hard time keeping him quiet in class tomorrow

I am so glad I did this. It was a small thing to do, but he'll cherish this for the rest of his life!

Total cost (including camping, petrol, food, drinks, snacks, everything!) Less than R250
The CRF70 used less than 2 litres of petrol and the TransAlp used approximately 5 litres.