.
While we had two days to travel to Kimberley, we had three days to travel back, which meant that now we could really go into "touring mode". Shorter distances each day and much more time to stop and look around.

After having a nice breakfast with the extended family we said our goodbyes and hit the road somewhere after 11am. Only 268km to do today, our second shortest day. 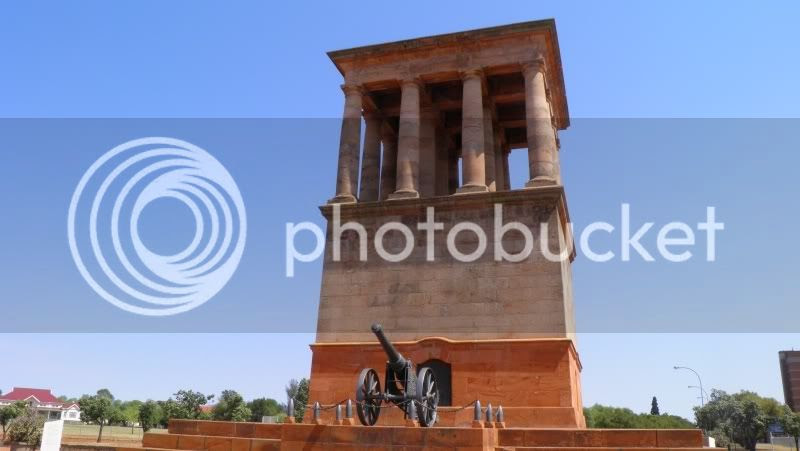 Barely two kilometers out of Kimberley on the Bloemfontein road I suddenly spotted a swarm of bees. It was too late. I only had time to lower my head as I got hit all over.

Luckily I had closed my visor not a minute before.

I pulled over immediately and we were off the bike in a flash to see if I was stung. There were bees all over. Mrs.TR grabbed my helmet and removed three bees from it as far away from me as possible. There was a sticky residue all over my jacket, gloves and helmet but I was sufficiently covered up and did not get 'n single sting.

Mr's TR had a single sting on her glove, but it did not penetrate to her hand. What luck!

ATGATT! All the Gear, All the Time! No matter what the outside temperature is.

We hit the road again and soon we leave the tar behind to ride some Free State gravel roads: 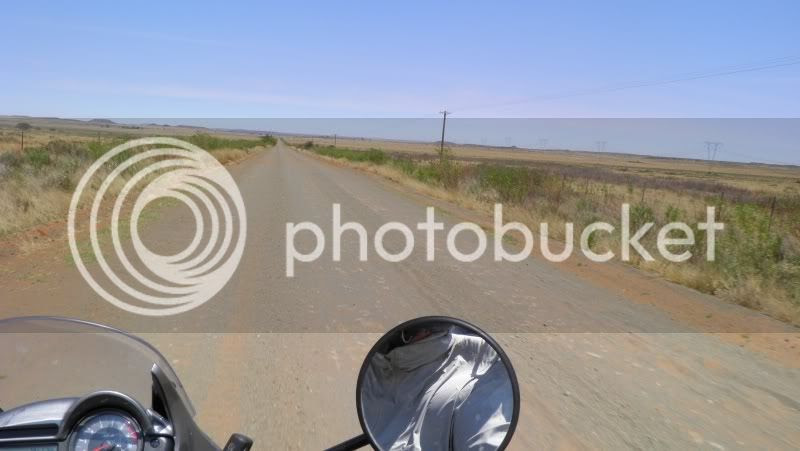 The Koffiefontein district saw lots of military action during the Anglo-Boer War. Boer forces attacked the town and several blockhouses were built by the British in the area. The blockhouses saw several skirmishes and at one point the town was looted by the Boers and the people of the town took refuge in the mine.

During the Second World War a P.O.W. camp was situated here. It housed several Italian and German prisoners of war, as well as South Africans who were suspected of being pro-Nazi. One of these South Africans were John Vorster who became prime minister of South Africa in 1966 and was president of SA from 1978 to 1979.

We however came to see the Coffeepot, cup and saucer fountain under the town's name: 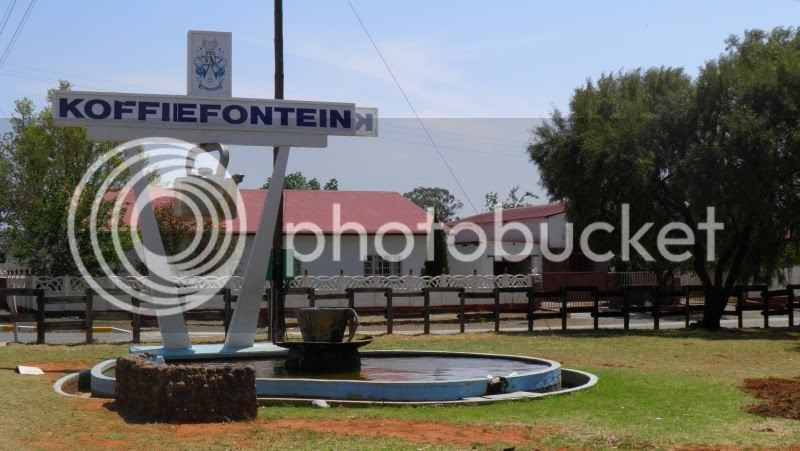 Sadly the fountain was not flowing today.

We rode around the small town and of course photographed the church: 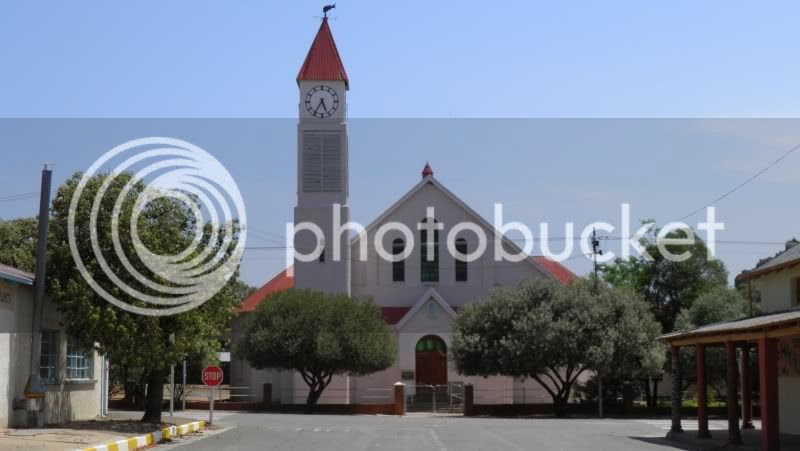 After the dusty road on a hot day we were looking forward to a nice lunch and even a milk shake! But Koffiefontein has nothing of the sort. We could not find a single place to eat or have a cold one.

We bought a cool drink at the shop and were on our way. 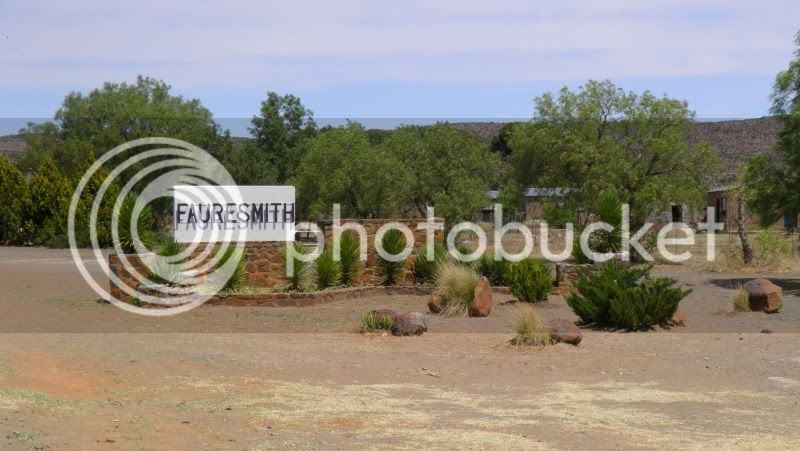 Koffiefontein left us with a feeling of disappointment. Maybe we expected to much. Fauresmith on the other hand was just another spec on the map; another town to pass through. It was so much more! What a lovely little town: 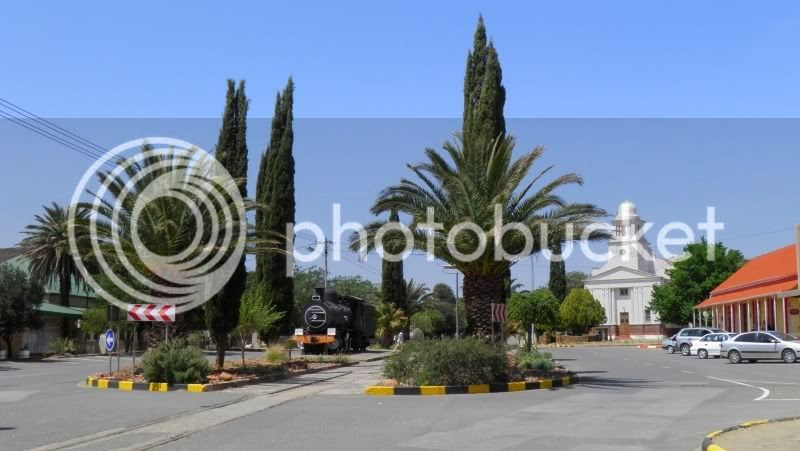 Fauresmith is the only town in South Africa, and one of only three in the world, where the railway line runs down the centre of the main road. But much more than that - it is the second oldest town in the Free State. The first House of Assembly had to choose between Fauresmith and Bloemfontein to determine which would be the capital of the Free State. The vote went to Bloemfontein - with a two-vote majority!

When last did you see one of these: 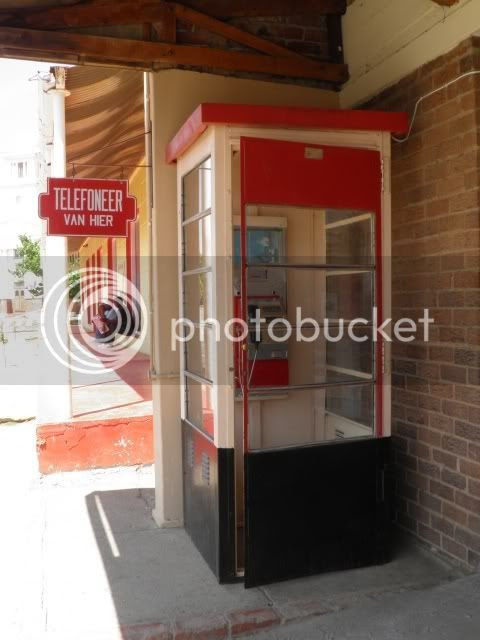 We walked into a small shop and got some ice cream. Everybody greeted and chatted, asking where we come from, where we're heading etc. We got that genuine "small town" feel.

Relaxing on the "stoep": 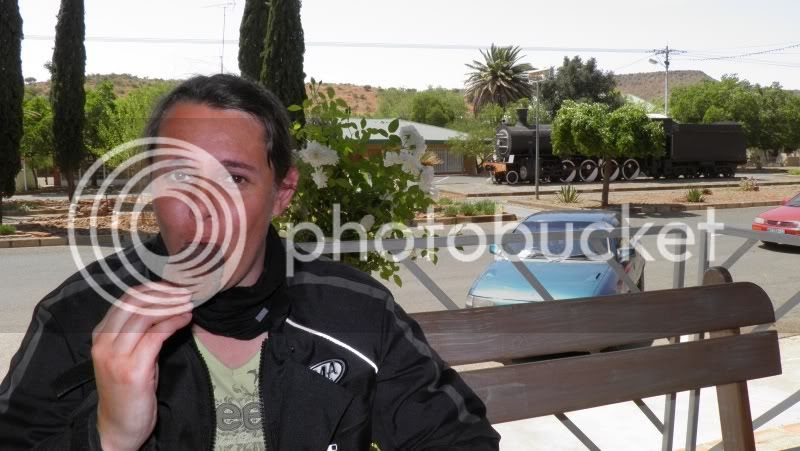 From Fauresmith we take the gravel roads towards Philipolis. 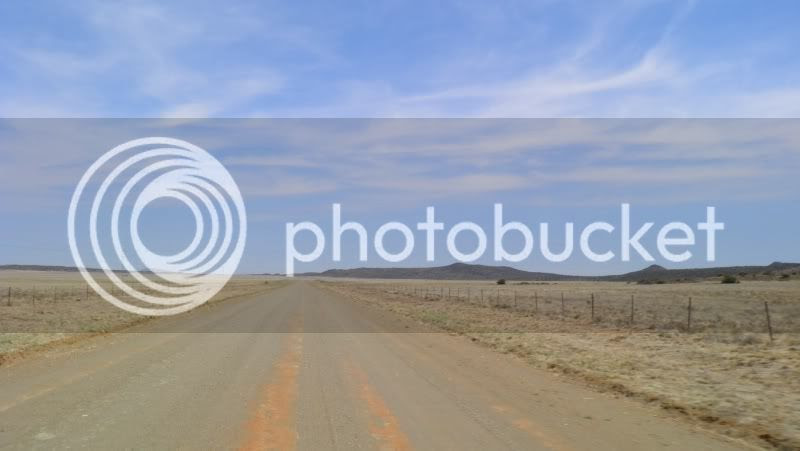 This was a hard packed road covered in a layer of loose sand, just enough to make it interesting. Since we were riding on knobbly tyres it wasn't even an inconvenience, but there was enough to make the bike "wiggle" from time to time when I felt Mrs.TR loosen her grip a bit.

I do enjoy it when she holds on tightly. 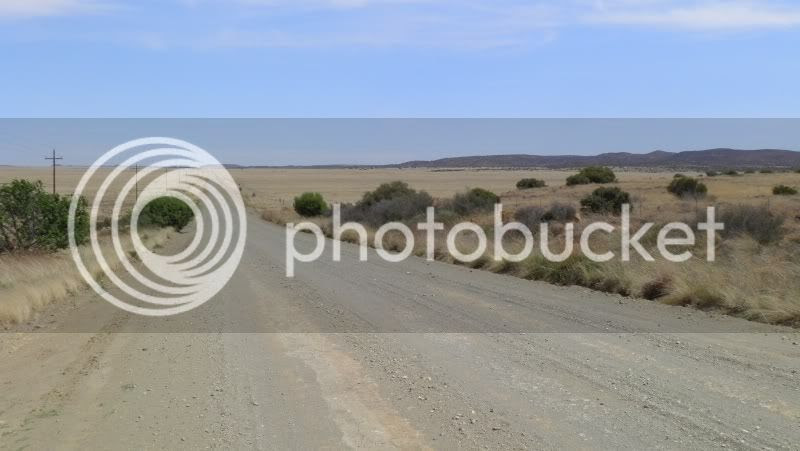 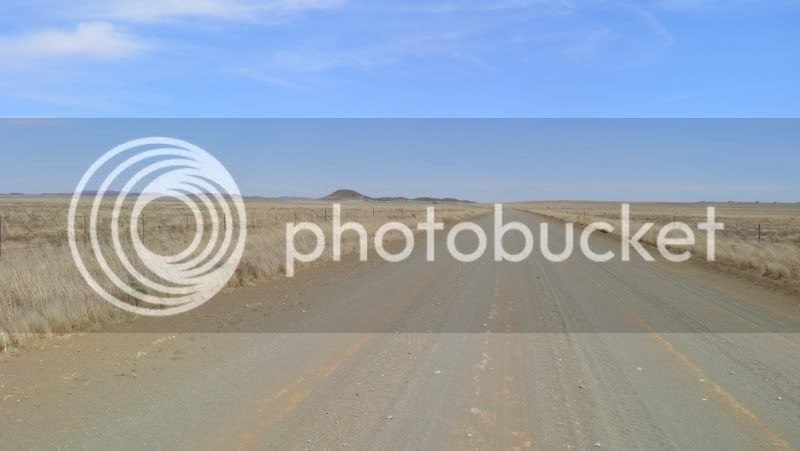 The "face" of Philipolis - another surprisingly beautiful little town: 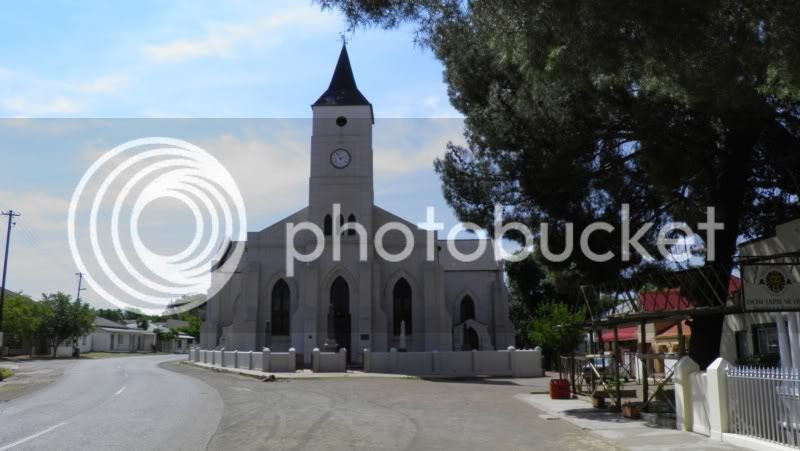 The last section from Philipolis to Colesberg was tarred: 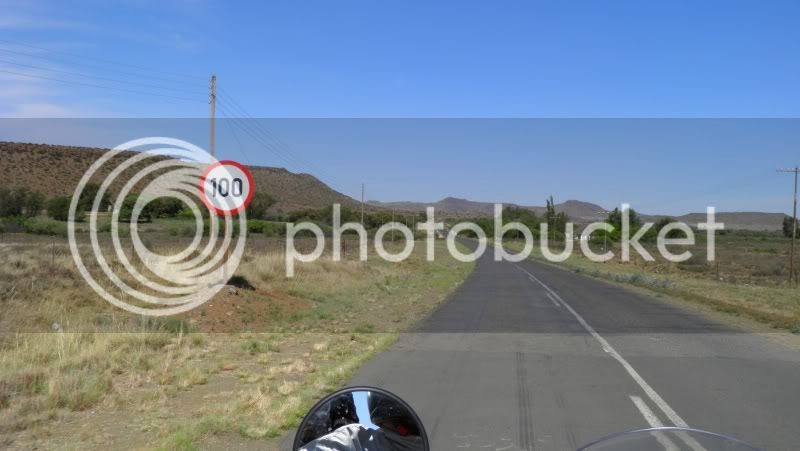 This soon became the worst section of the day. This road was badly potholed and we even had some sheep run straight in front of the bike at one stage. 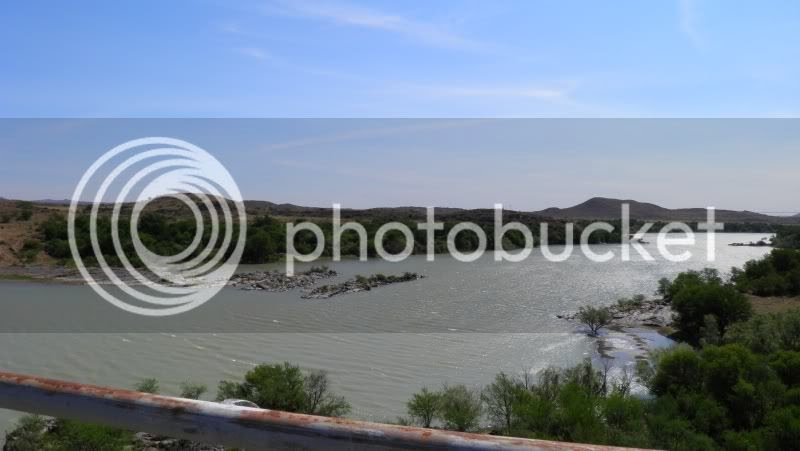 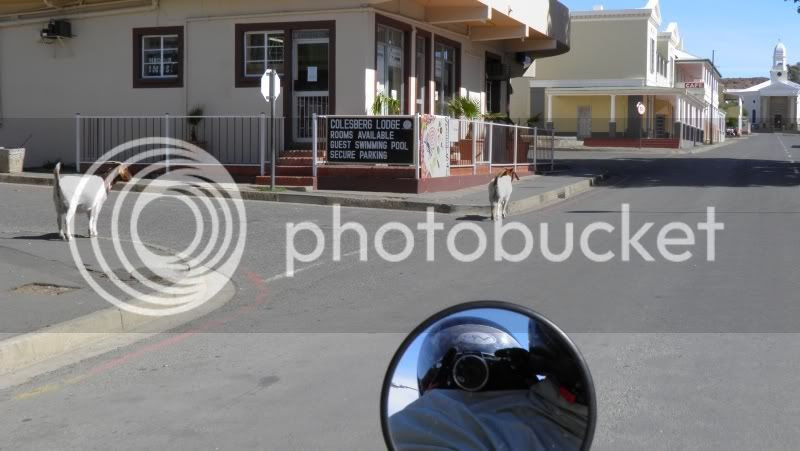 Colesberg is a popular traveler's stop on the N1 Cape Town-Johannesburg route. 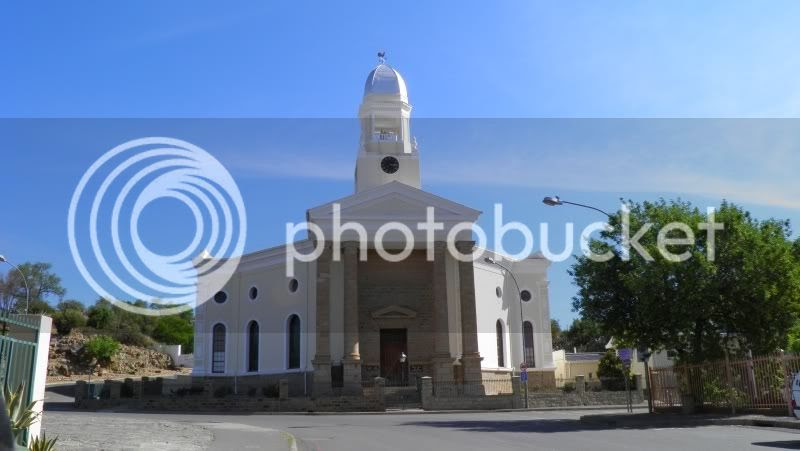 Early travellers called it "Toverberg" that translates into "Magic Mountain". It's fitting then that we stay at the Toverberg B&B.

Our home for the night - a very nice 2 bedroom cottage: 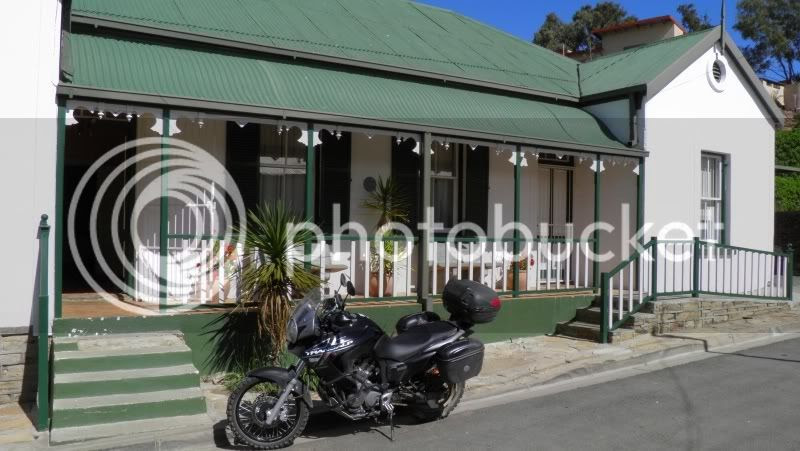 I wonder if Mrs.TR will want to do a tent trip again? 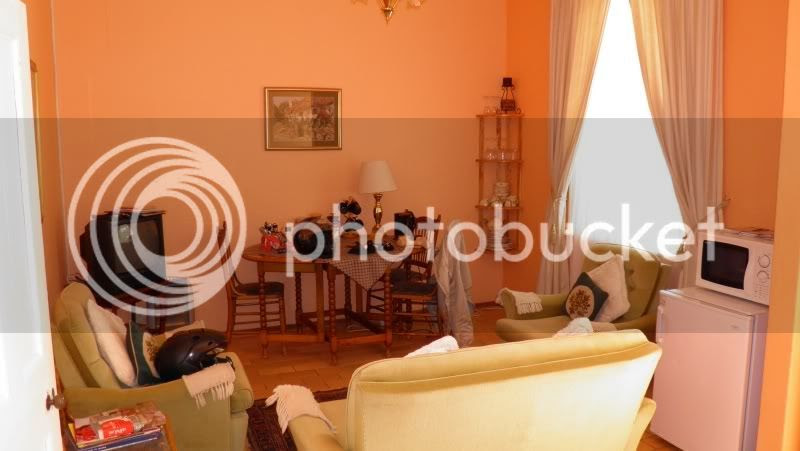 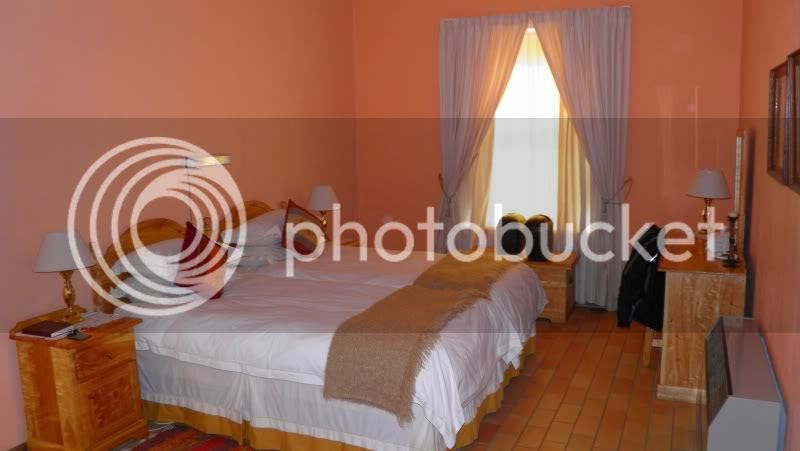 We settled in and discussed the day over a nice glass of wine. We certainly live in a beautiful country. You just need to get out and see all these places you so easily drive by. This is when we realized something we didn't pick up today. Every town used to have a church and a Hotel (either a "Grand" or a "Royal"

). We did not see a Hotel in Koffiefontein, Fauresmith or Philipolis.

Thinking back we could not remember seeing one in Richmond either. Instead every town, even the very smallest of towns, seems to have a chinese shop. Times certainly are changing.

After dinner Mrs.TR settled in and I got stuck in some of the interesting books in the Toverberg B&B.

Some history on the Anglo Boer War involving Colesberg:

Boer forces under Generals Schoeman and Grobler marched into Colesberg unopposed on Tuesday 14 th November 1899. To stop this advance into the Cape as quickly as possible, Sir Redvers Buller sent Lieutenant-General J.D.P French Commanding Cavalry Division, to Noupoort with orders to remove the Boers in and around Colesberg and push them back over the Orange River.

Undeterred by these difficulties, General French continued to push forward and by the 30th of December he had advanced to Rensburg.

On Monday 1st of  January he reached Coleskop,which stood 364m high, in the centre of an open plain, affording French a wide view of Colesberg and the Boer positions around it. By January 4th the British had gained more ground – Colesberg was almost surrounded.

From his position at the top of Coleskop it had become apparent to General French that the capture of a koppie north-west of Colesberg,would have cut of the Boer supply lines over the Orange River, along the roads to the Wagon Bridge, Botha's Drift and Norval's Pont.

In response to Genaral Schoemans appeal for reinforcements, General De La Rey arrived in Colesberg on the 10th January 1900 with a force of about 1000 men. He set up camp North east of Colesberg, where he soon proved himself to be a formidable opponent.

General French realised he was up against a strong adversary moved troops east of Colesberg to Slingersfontein Camp and sent for reinforcements.

In response to this request, Roberts sent over three thousand infantry to strengthen the British forces around Colesberg. This was said to bring the total number of men to almost 8000.

Boer forces were estimated at just over 5000. On the 5th February 1900 General French and his cavalry left Colesberg to take over the task of relieving Kimberley. His departure left a considerably smaller, less mobile force under General Clements, who had replaced General French. Well aware of this General De La Rey renewed his attacks and by 15th January 1900, he succeeded in driving the 6000 remaining British troops back to Arundel – the position General French had started from just under three months before.

But this victory was short lived – three days later Lord Roberts' army attacked the Boers at Paardeberg. In Colesberg,  alarmed by Roberts' advance into the Free State, Pres Stein ordered De La Rey to withdraw with 1500 men to take part in the rescue of Cronje and the main force of Boers.

The loss of De La Rey and a weakened Boer force under the passive General Schoeman,enabled General Clements to move out of his defensive position at Arundel.

By the 28th February 1900 the Boers retreated, making it possible for Clements' troops to march into the town and raise the British flag over the Magistrates Court. For the remaining years of the war British troops under Lieutenant Colonel R Holden, remained in Colesberg to safe guard the position.

Camps were placed at strategic positions in the district stretching from the Orange River to Noupoort.Defensive fortifications, blockhouses and walls were erected around the town and along the railway lines. These fortifications were often under attack as encounters with the Colesberg rebels in the area continued to cause the British endless problems.

In 1901 five of these rebels were executed at Colesberg. In and around Colesberg, cairns, graves,walls, blockhouses, names scratched on rocks  and other war debris are all that remains of the actions that took place here during the Anglo-Boer War.


Every corner of South Africa was touched by that war. But with that I also had to turn in. Tomorrow - Nieu Betesda!


Our Stats for today: