The Honda XL700V Transalp is a great bike to ride and own. It's reliable, comfortable and a lot more capable than most people thought it would be!

This post is not about singing this great bike's praises though, but rather to help owners and prospective buyers of secondhand Transalps to know what the known issues are and what to look out for when buying a secondhand Transalp.

As an owner of my 2nd XL700V Transalp and avid reader of bike forums I have picked up some universal niggles being discussed about the 700 Transalp and I'll discuss these issues and offer remedies for these problems where I can. 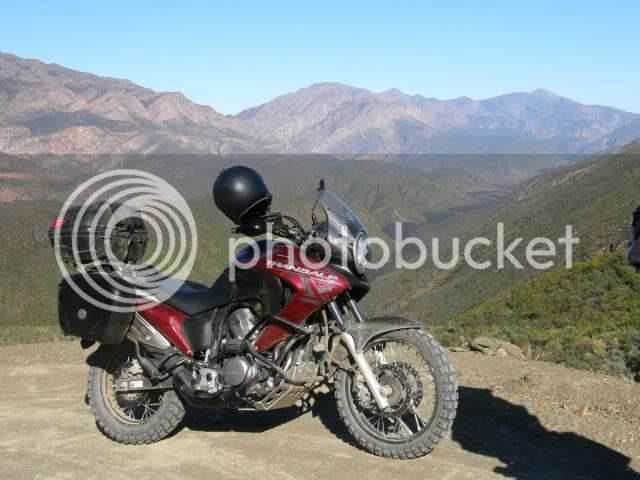 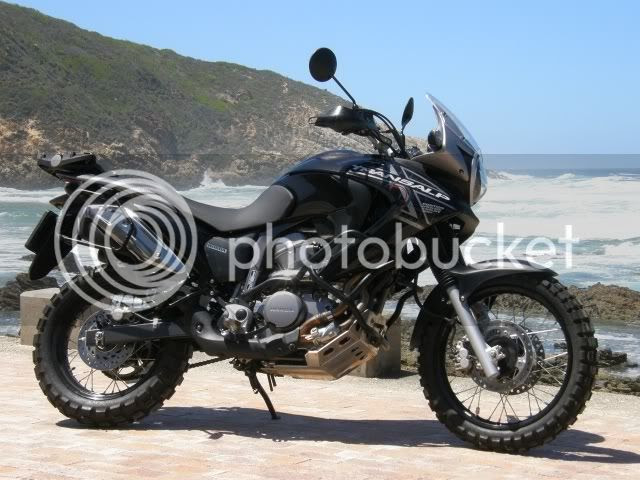 
This being a Honda, there are no big issues like front axles snapping and suspension breaks that happen at the most inopportune times. The Transalp "issues" are mostly small stuff, but still, just be aware of it.

2. Rattles in the head unit.

This is something I have seen discussed several times. My first Transalp did not have this problem, although a friend's Transalp did. When I bought my second Transalp early in 2010 the same thing happened to that Transalp, so I guess it's pretty common. 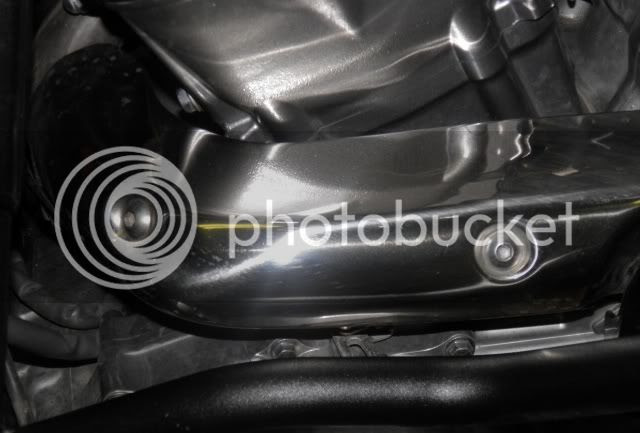 The problem: The screw coming loose touches the exhaust and as a result of the heat and cold cycles works itself loose. Use a shorter screw - problem solved!

Some people complain of "rattles" or "squeaks" in the head unit, especially after having ridden on dirt roads. Hard plastic moving against each other with dust in between would do that I guess. Once again my first Transalp did not have this issue, but my second one did.

The solution to this problem is also rather straight forward (or I thought it was). First I took apart my bike's head unit: 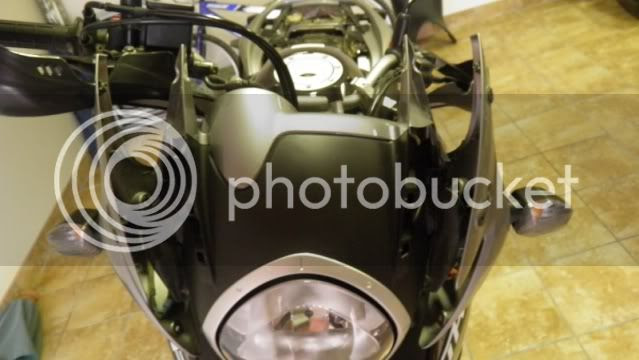 Next I got patch (yes, good old puncture fix patch) and cut them to size: 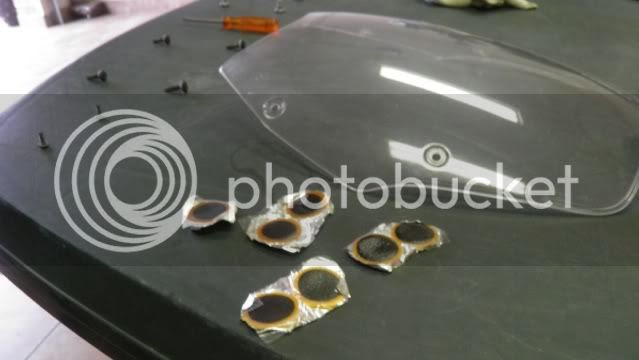 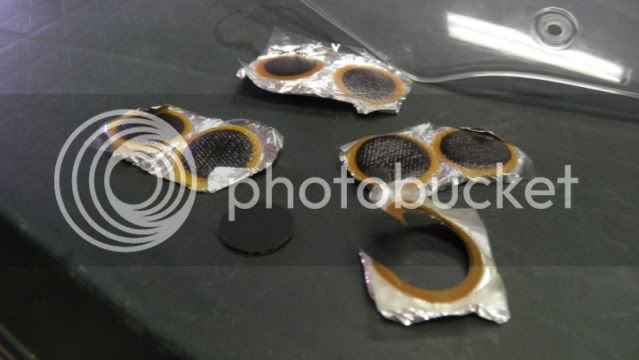 Now I used the patch as "washers" between the places where the head unit screwed together: 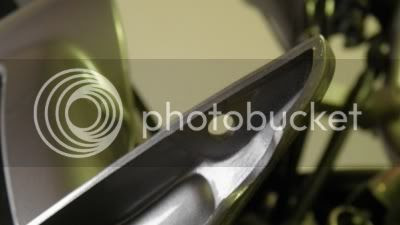 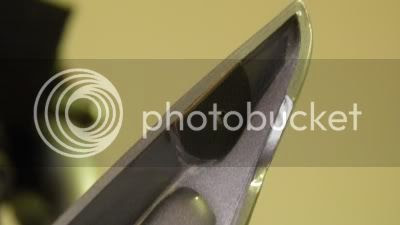 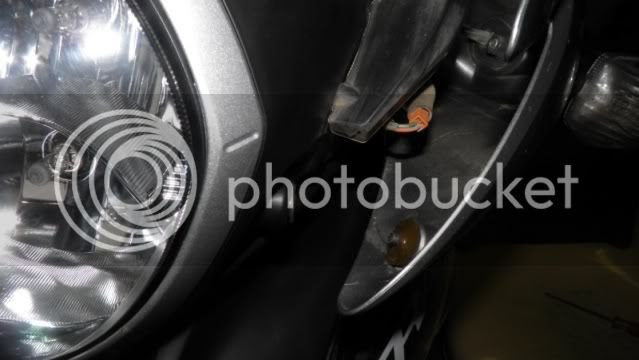 Problem solved! Not a squeak to be heard! Everything screwed back together nice and tight. 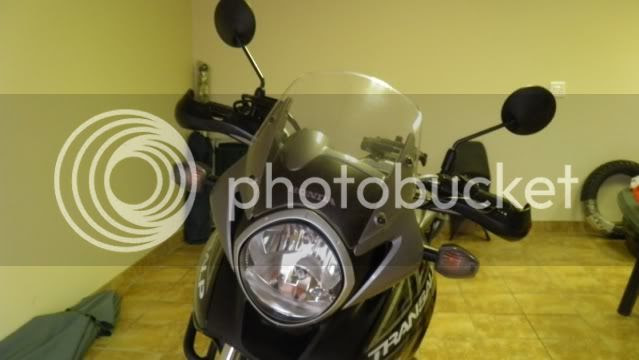 Don't tell anyone my bike is held together with patch!

I have not experienced or seen this on either of my bikes (I live in a coastal area, but not right on the ocean). I clean my bike regularly and would notice immediately if it starts. That said I have heard of one case in Cape Town and on the internet forums riders from countries that uses salt on the roads seem to complain of it regularly.

In many of the cases reported Honda has replaced the mirrors / wheels under warrantee.

Even if you don't have surface rust on your mirror stems / spokes enough of these instances have been reported, so using a corrosion protectant spray on these areas as 'n preventative measure will be a good idea. Prevention is better than cure!

Some riders complain of the bike having a "headshake" if you take both hands of the handlebars. Now while most riders would not ever take both hands off the handlebars, this is something you must be aware of as it can catch you seriously unawares. My first Transalp did this and it seemed to be the most severe at slow speed (< 20 km/h). Some people on the internet forums had various explanations and remedies. Some said it only happened when you carried a top box, others blamed the tyres they were running and even said that wheel balancing could fix the issue.

Here's my experience: In my case the top box (a 49L Givi / Kappa box) made no difference, either loaded or empty. My wheels were balanced so that was not the issue. It did seem to be slightly worse when running knobblies (Continental TKC80's) than when running Metzeler Tourances. I never did solve the problem apart from never letting go of the handle bars.

That said - it's not really a "problem". Even with one hand only lightly touching the handle bars there was no indication of a headshake whatsoever. It's quite possible that another rider, whose hands never left the handle bars at the same time, could have owned that bike for 100 000km and never have known about this "issue".

Now here's the funny part - my second Transalp does not do this at all. Not at any speed, loaded or not, with any sort of tyre. Somehow it seems that some Transalps do this and others not at all. Go figure.

This not something that happens frequently, but it has happened to me and I have seen two other cases on the internet, so I include it here. In all the cases Honda replaced the radiator under warrantee.

At first I thought a flying stone caused the damage to my radiator and that might even have been the case, but the incident was very similar other documented cases so here goes:

The radiator seems to start leaking at the bottom screw here: 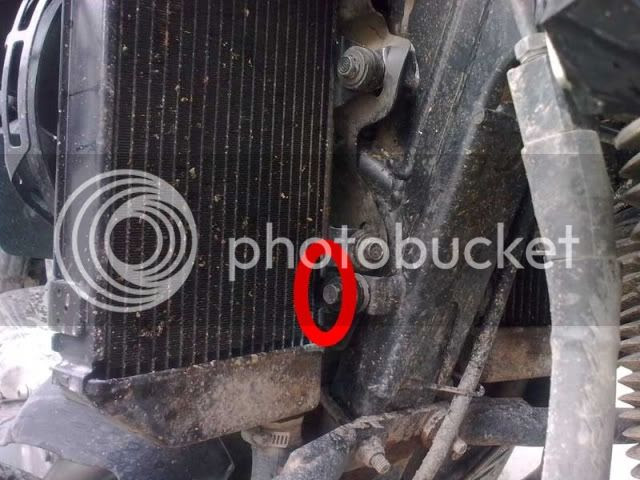 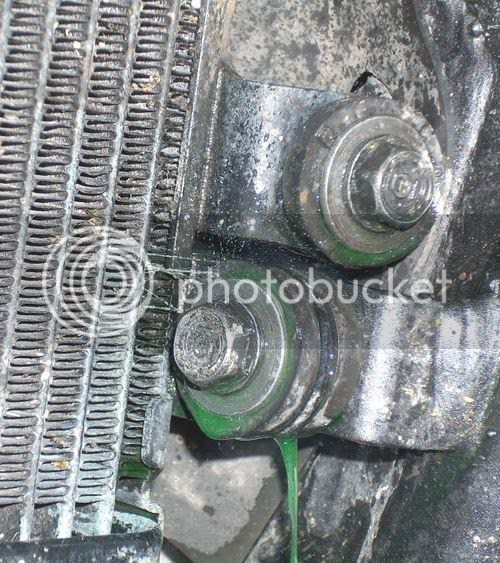 The case on my bike: 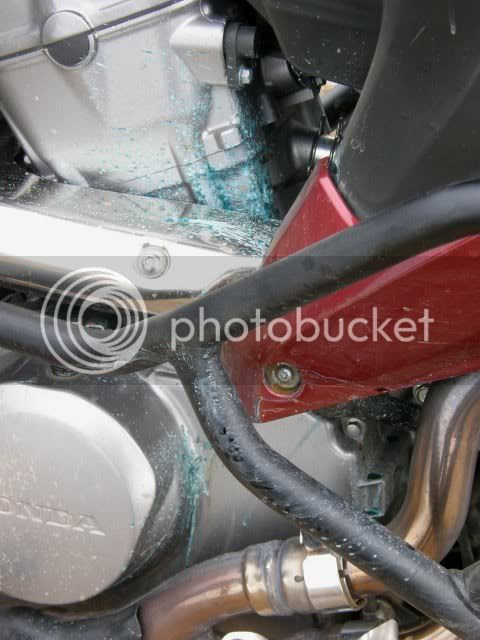 When I saw this I was quite distressed. I made sure the radiator reservoir was full and kept riding while checking the water level regularly. In my case I could not see the leak at all and it did not leak when the bike was stationary, so I guess it only leaked when under pressure. I rode more than 300km to the Honda dealer and after that distance the radiator reservoir was still above the minimum level. My bike had approximately 25000 km on the clock at the time of the incident.

Bike fixed by Honda. Top two pictures from this thread.

This is not an issue, but it is a frequently asked question so I also include this here. Do not get a fright when you test ride the bike.

Under normal riding conditions normal operating temperature is around 77 - 82 degrees Celsius. In slow moving traffic it can shoot up quickly, but the radiator fan will come on at 103 degrees Celsius and bring it down to 100 degrees. The 100 - 103 -100 cycle will continue while in the slow traffic but as soon as you hit the open road the temperature will come down to normal operating temperatures.

My second Transalp ran at 88 degrees Celsius in "normal operating conditions". Honda replaced the thermostat under warrantee and everything was back to normal. Mine is the only thermostat replacement on a 700 Transalp that I know of.

Grrreat shortlist! Are you planning on posting this on ADVrider? Or xrv.org.uk? If not - I will ;)

I had a headshake for 50,000 kms. i drove me crazy, i like being able to take my off if i need to. Anyway, tyre changes made no difference for me. I changed the fork oil being very particular about equal amts in each of the forks. problem been gone for the last 15000 kms.

I put a pair of Michelin anakee 3's on mine and it has never handled better with the head shake long gone, I figure its how the tread pattern is set out on the standard rubber

... but then the problem came back. Halfway thru riding UK>Thailand, I replaced both tyres to Heidenau Scouts, but the head-shake problem still persisted.

I can also add that I too, in the hot European climates, thought something had gone wrong when the temperature gauge (which rarely went above 80 deg in the UK) started running at around 97 degrees. This was more noticeable in the hotter afternoons, and as I rode further south in the hot summer. Took the thermostat out, which had no effect. Stopped at a Honda dealer in Germany, who assured me nothing was wrong !

Basically I understood from his German "If the fan is cutting in at about 103 degrees, everything is fine. If the temp reaches 130, then the red light comes on, then you do have a real problem, Yhah"