.
The Gouritz River in History:

Before the exploration of the coast by the Netherlanders the Portuguese had, in the Martellus map of 1489, indicated a river roughly where the Gourits is. On the map it appears as Rio della Vache, which in Portuguese is Rio das Vaccas (the river of the cows). It is generally accepted that after the voyage of Bartholomew Dias it was named Rio dos Vaqueiros (river of the cow-herds).

In 1487, Bartholomeus Dias set out to find a sea route to the East. Sailing along the west coast of Africa, his ships encountered a ferocious storm, which drove them out to sea and away from the coast. Once the storm had passed they resumed their journey in an easterly direction, expecting to reach the coast, their guideline, again soon. After a number of days' sailing without any sign of land, they changed direction and headed north, eventually landing at the mouth of the Gouritz River on the east coast of Africa on 3 February 1488. Dias and his crew were the first Europeans on record to round the Cape, albeit unwittingly.

The exact origin of the name Gouritz cannot be stated with certainty. G. M. Theal mentions Hieronimus Cruse who first crossed it from east to west in 1667 after he had gone by sea to Mossel Bay. Cruse found there a Hottentot tribe, the Gouriquas, after whom he named it. C. Pettman says that the Hottentot word means 'dirty'.

In 1739 the first cattle farmers crossed the Gouritz river. The resident Khoi immediately became involved with the farmers and by 1770, most of them were working for the farmers.

The Gourits River enters the Indian Ocean on the southern coast of Africa at 21° 53' E. and 34 km south-west of Mossel Bay.

The whole system, which is shaped like a deltoid leaf, consists of a number of rivers, which emerge from the encompassing mountains, usually through spectacular poorts, and then unite to form one river near the coast. Only the lower 129 km is named Gourits. The drainage area is 44 000 sq km, 370 km wide from east to west and only 257 km long from north to south. The most important branches of the system are the Buffalo River from the west -with its main tributary the Touws River, together forming the Groot River, which joins the main stream 85 km from the sea; in the middle the Gamka with its main tributary the Dwyka; from the east the Olifants River with the Kammanassie and some smaller streams rising north of the Swartberg Range. 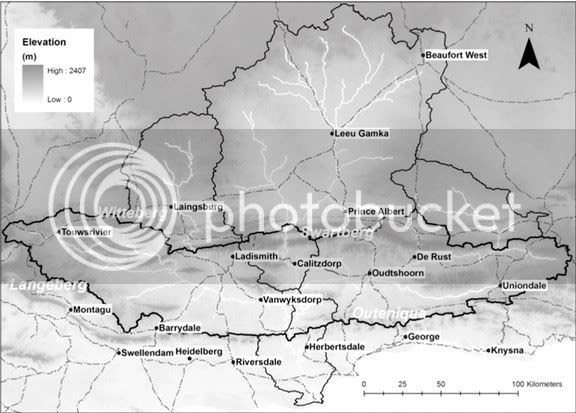 The entire drainage area is Karoo country - with the exception of the Outeniqua Mountains and a strip lying to the south of them. The rainfall is from 102 to 305 mm except on some of the high mountains - the Swartberg Range and the Outeniqua Mountains - where it rises to over 1 000 mm. The run-off is generally low and is sharply divided between the small but very important perennial flows from numerous mountain streams, and the occasional big floods, which are sometimes very destructive.

The future of the Gouritz River:

The greater Gouritz-catchment area houses three of the most important biomes which were identified as world hot spots - the Fynbos, Thicket and succulent Karoo. Each of these important biomes houses at least 1 500 endemic species.

This is where the Gouritz Initiative comes in:

The main purpose of the Initiative is to create a corridor along the Gouritz River, where naturally occurring indigenous animals and plants could disperse freely from the conservation a reas of the inland mountains (Anysberg-Swartberg and Gamkaberg-Rooiberg ranges) to those of the coastal mountains (Langeberg-Outeniqua ranges). The intent is also to create a conservation area along the Gouritz River from Herbertsdale to the sea to ensure that the inland section is directly linked to the coastal environment.

The area in Blue: 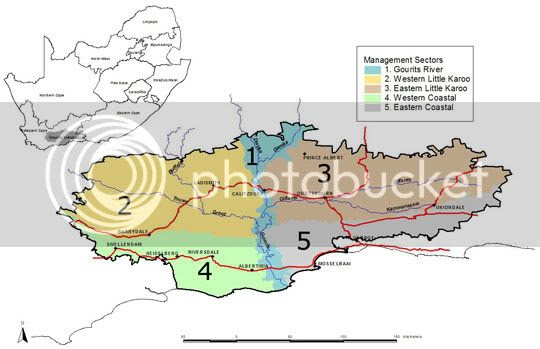 The boundaries of these management sectors were defined by using the Subtropical Thicket Ecosystem Plan vegetation map, the Cape Action for People and the Environment project vegetation map, a 100 m digital elevation model and the river courses. Final boundaries were fitted to cadastral boundaries.