.
A while ago I spent weeks on crutches after a knee-op to fix some torn knee ligaments. I spent that time Reading Ride Reports and thinking up new routes and trips. This is one of those.

Looking at the maps of the area I noticed that you could cross the Gourits River six times and that such a trip from George could also include several passes.

It's a 400km+ trip though, so I had this one filed for some day in summer when we can have an early start (little did I know).

Rides following rivers is not a new idea. Tok-tokkie did it on his amazing Sak River trip. Following a river is rarely a bad idea. Rivers (obviously) follows the lowest route and routes following rivers zig-zag over that river, so usually you have some nice passes, great views and varying scenery - especially with a river like the Gourits that runs from the semi arid Klein Karoo, through a mountain range, over the Garden Route plains and finally into the Indian Ocean.

Our route would include the Montagu Pass, Rooiberg Pass and Cloetes Pass (all gravel) and run through small towns like Van Wyksdorp and Herbertsdale. It's a long ride, but it includes some tar where you could make up some time. We have Dual Purpose machines which means they can ride on tar as well. 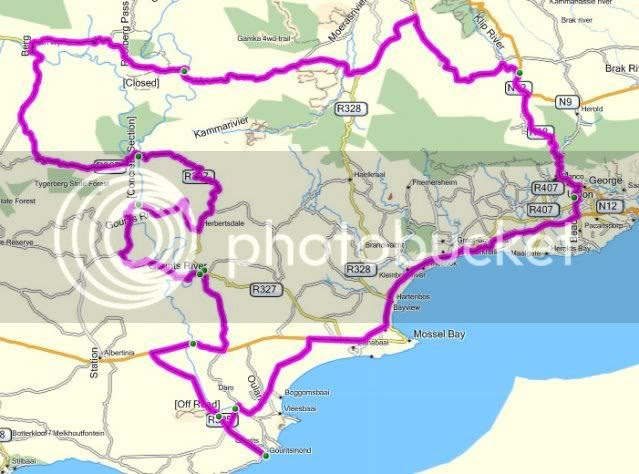