On the Trail of Gideon Scheepers


.
What really happened to Gideon Scheepers, the gallant 23-year-old Boer fighter who was executed by a British firing squad some months before the Anglo-Boer War was to end, nobody knows. His body was never found. But he became an almost legendary figure in South African history.

As he was considered innocent (and famous because of his daring exploits in the Cape Colony) Scheepers' execution caused an outcry throughout the world. The execution has now generally been condemned by Boer and Briton as a disgraceful act, but its consequences were more far-reaching than anyone could have foreseeen at the time - Gideon Scheepers took his place in the martyrology of Afrikanerdom.

This ride will follow the last exploits of Gideon Scheepers in the Anglo-Boer War right up to his capture, trial and execution.

The discovery of gold at Witwatersrand in the Transvaal in 1886 ended Boer seclusion, and brought a mortal threat to the young nation's dream of freedom from alien rule. In a masterful 1979 study, The Boer War, British historian Thomas Pakenham revealed previously unknown details about the conspiracy of British colonial officials and Jewish financiers to plunge South Africa into war.

The War that followed was the longest (almost three years), the most expensive (over £200 million) and the most disastrous of all wars for Britain between 1815 and 1914.

The Boer men were citizen-soldiers. By law, all males in the two republics between the ages of 16 and 60 were eligible for war service. Even as they prepared to face the might of the world's foremost imperial power, the Boers were confident and determined. The hopelessly outnumbered Boers fought against the Empire with great success. The British responded with a scorched earth policy of destroying Boer farms and moving civilians into concentration camps.

Boer fighters were chivalrous in combat. A few years after the end of the war, when passions had cooled somewhat, the London Times' history of the war conceded:

In the moment of their triumph the Boers behaved with the same unaffected kindheartedness ... which they displayed after most of their victories. Although exultant they were not insulting. They fetched water and blankets for the wounded and treated prisoners with every consideration.

In stark contrast to this Lord Kitchener ordered all Boer prisoners to be killed. In addition to this civilians were to be targeted, their possessions burnt and the women and girls rounded up in camps.

John Dillon, an Irish nationalist Member of Parliament, spoke out against the British policy of shooting Boer prisoners of war. On February 26, 1901, he made public a letter by a British officer in the field:

The orders in this district from Lord Kitchener are to burn and destroy all provisions, forage, etc., and seize cattle, horses, and stock of all sorts wherever found, and to leave no food in the houses of the inhabitants. And the word has been passed round privately that no prisoners are to be taken. That is, all the men found fighting are to be shot. This order was given to me personally by a general, one of the highest in rank in South Africa. So there is no mistake about it. The instructions given to the columns closing round De Wet north of the Orange River are that all men are to be shot so that no tales may be told. Also, the troops are told to loot freely from every house, whether the men belonging to the house are fighting or not.

The term "concentration camp" was first used to describe camps operated by the British in South Africa during this conflict.

A crusading 41-year-old English spinster, Emily Hobhouse, visited the South Africa camps and, armed with this first-hand knowledge, alerted the world to their horrors. She told of internees "... deprived of clothes ... the semi-starvation in the camps ... the fever-stricken children lying... upon the bare earth ... the appalling mortality. These people will never ever forget what has happened," She also declared. "The children have been the hardest hit. They wither in the terrible heat and as a result of insufficient and improper nourishment ... To maintain this kind of camp means nothing less than murdering children."

"These people will never ever forget what has happened"

Hobhouse found that none of their hardships would shake the Boer women's determination, not even seeing their own hungry children die before their eyes. They "never express," she wrote, "a wish that their men must give way. It must be fought out now, they think, to the bitter end."


In the Cape Colony the British had always feared a general uprising against them as there was widespread and openly expressed pro-Boer sympathy. How strong was this rebel impulse may be gauged by the fact that in some of the border districts no less than ninety per cent of the voters joined the Boer invaders upon the occasion of their first entrance into the Colony. They were called the Cape Rebels.

The distinction between Boer combatant and Cape Rebel is important. Boer combatants were considered Prisoners of War when caught and had to be treated accordingly. Cape Rebels on the other hand were not seen as prisoners of war. Those persons who lived in the Cape Colony and were caught fighting on the Boer's side faced a trial of treason and many were executed by the British military courts. Often the family of a Rebel was also targeted and any property the family owned were disowned. As the rebels fought in areas where they lived and were known, becoming a Rebel was a HUGE risk for both the individual and his relatives. Yet a great many followed Gideon Scheepers. Brave men, great leader. 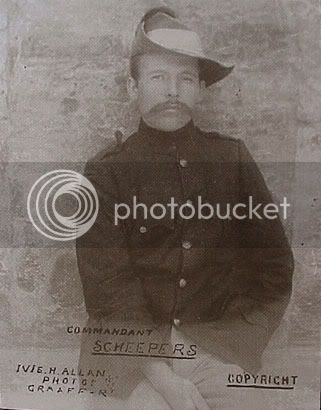 It is important to note that Gideon Scheepers himself was NOT a Cape Rebel. He was born on 4 April 1878 in Middelburg in the Zuid-Afrikaanse Republiek.

At age 16 Gideon Scheepers joined the Staatsartillerie in the Transvaal Republic and was soon a first-rate telegraphist, heliographer and later in the SA War a scout that the Boer leader, General Christiaan de Wet, prized. He took part in the Battle of Magersfontein and escaped capture when General Piet Cronje surrendered at Paardeberg.

At age 22 he got the rank of Commandant and led a commando of 150 men who took on the British in the Cape Colony. His aim was to disrupt the British War effort by damaging communication networks and railway lines. From the surrounding country they gathered a fair number of recruits, and they were able through the sympathy and help of the farmers to keep themselves well mounted and supplied.

It might at first sight seem the simplest of military operations to hunt down these scattered and insignificant bands, but as a matter of fact nothing could be more difficult. Operating in a country which was both vast and difficult, with excellent horses, the best of information and supplies ready for them everywhere, it was impossible for the slow-moving British columns with their guns and their wagons to overtake them. Formidable even in flight, the Boers were always ready to turn upon any force which exposed itself too rashly to retaliation, and so amid the mountain passes the British chiefs had to use an amount of caution which was incompatible with extreme speed.

Scheepers had several successes and his bravery was legendary. His mere presence in the Cape Colony inspired more Boers to take up arms against the British. Up to 80% of Scheepers' commandoes consisted of Cape Rebels.

Compared to the rest of the war the happenings in the Southern Cape (more specifically the Langkloof and Klein Karoo) is but a small chapter. It's not surprising then that there was and is very little focus by historians on these events. Or so I thought... In my research it soon became apparent that there are information available for those willing to dig. Quite a bit of information actually!

Rebel activity (mostly the commandos of Gideon Scheepers and Cornelius Lotter) was the only action the Southern Cape has seen in the Anglo-Boer War. On this ride I will try to follow what Gideon Scheepers has done in the last months before his capture. I'll visit the interesting places where he left his mark, including the Monuments in his honour (the exploits of Cornelius Lotter also is a future project).

This was going to be a solo ride and this is the route I planned to to take: 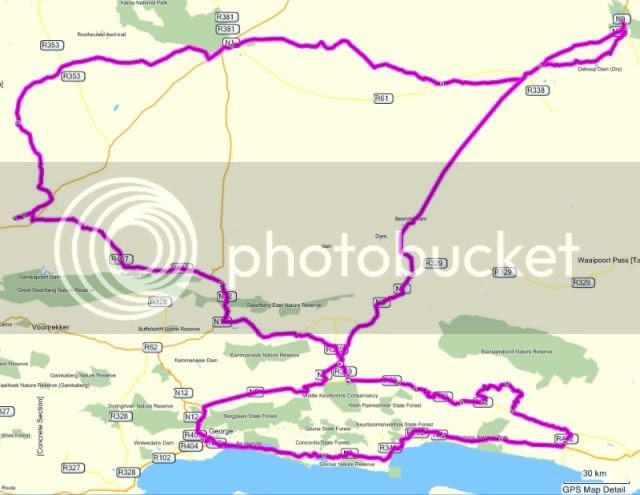 In the end I could not manage enough time off to do the ride all at once and it ended up taking a couple rides to finish (yeah, I've been holding out on you guys until I could post this Report in it's entirety

). As it turns out this was one of my favourite projects to date (I just love the historic stuff

). The rides were great also, riding solo, stopping when and as long as I want, investigating all these interesting places at my leisure.

So here it is -  On the Trail of Gideon Scheepers: 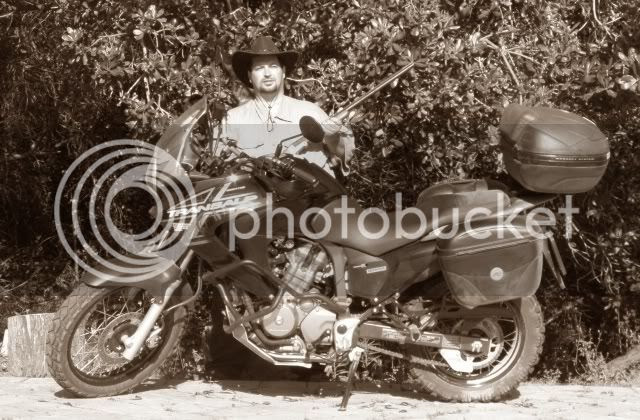 The Boers in "The Hell"

Scheepers in the Langkloof

4. Commandant Gideon Scheepers and the search for his grave, Shearing, Taffy and David