Strange situation. It's Saturday and we're not off on a ride somewhere.

As it turns out the nearby town of Mosselbay is hosting the Buffalo Rally this weekend. The whole of the Southern Cape is overrun with bikes of all types, shapes and sizes so Kermit and I decided to take a ride over to have a look.

The Buffalo Rally (also known as "The Buff") is one of the biggest, if not the biggest, Bike Rally in South Africa. It is hosted by the Nomads Motorcycle Club. The first "Buff" was held in 1969 in Bathhurst and was attended by 250 riders including some Hell's Angels. It was a huge success and it became an annual event growing bigger and bigger each year. Over the years the location of the "Buff" moved as the needs changed to towns like Aliwal North, Oudtshoorn, Bloemfontein and Port Elizabeth.

The refusal by the Port Elizabeth City Council to permit the Nomads Club the use of the Humewood Caravan Park for the 1984 Buff, the unsuitability of suggested alternative venues, as well as the subsequent Government Ban on open air gatherings resulted in the demise of the Buffalo Rally for a period of nine years.

After the repeal of the ban in1992, the Nomads Club decided to resurrect the Buff and in 1993 the next "Buff" was held in Oudtshoorn. It has since been an annual event.

Now I have never been one for Rallies, although I did enjoy the Route 62 Harley Rally. I'd rather spend a weekend riding than in large crowds. Today though we were hoping to see some cool bikes and just relax in the company of other bikers and as luck would have it, when Kermit and I got there we were just in time for the mass ride!

What a stroke of luck. This is something everybody should experience at least once and I'm so glad Kermit was here to enjoy it with me. 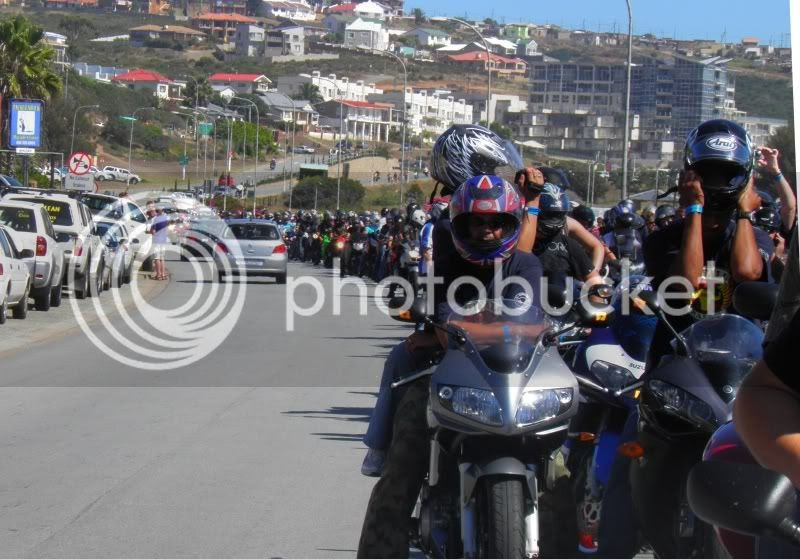 Over 5000 bikes attended the Buffalo Rally this year. 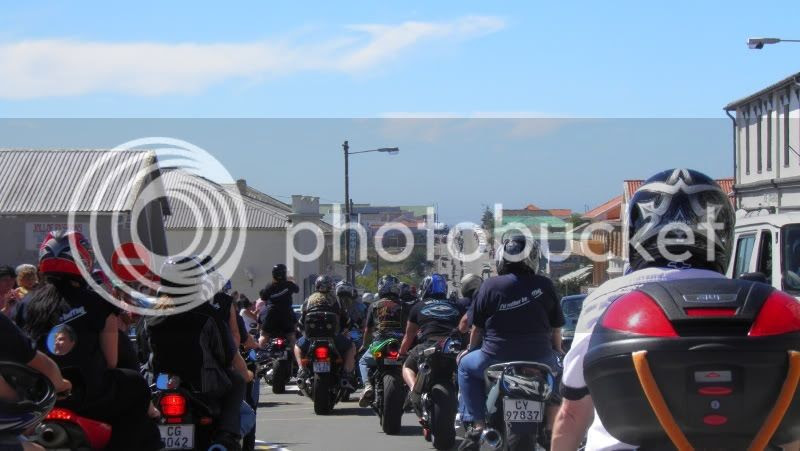 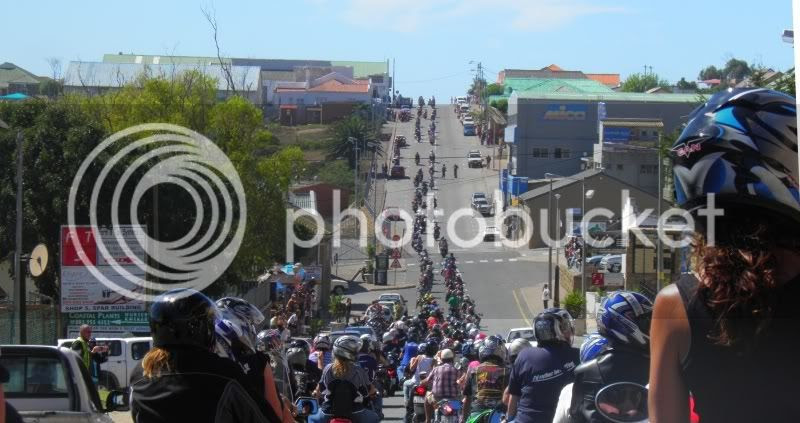 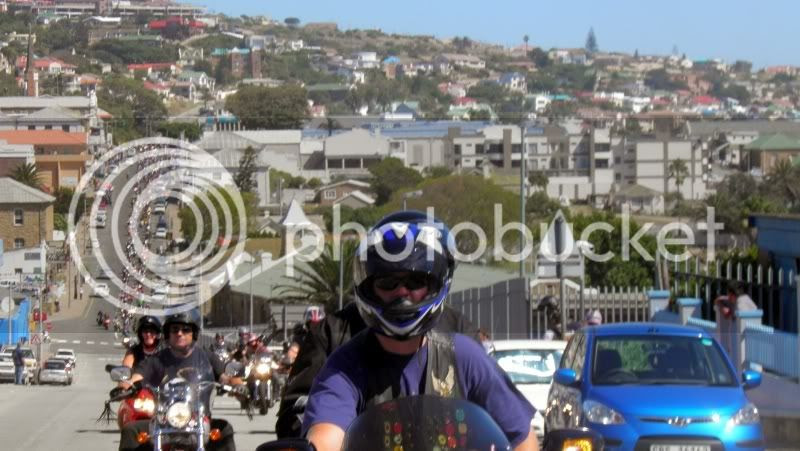 Quite an experience riding in such a large group. And all along the route people lined the streets taking photos and video. 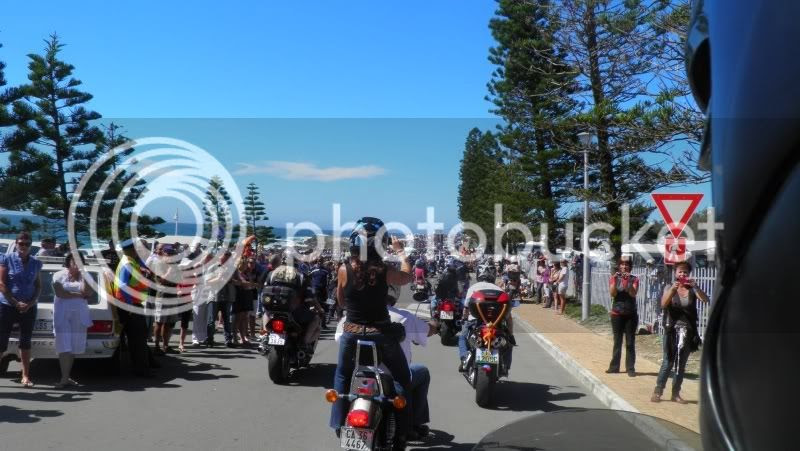 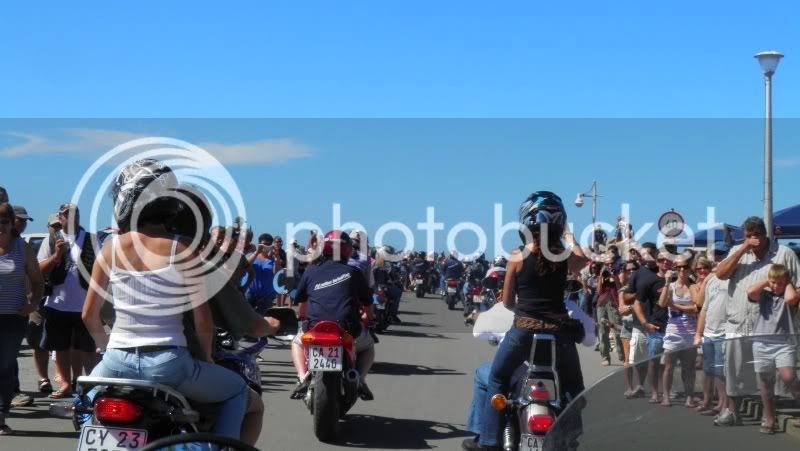 At one stage the route opened up and everybody gunned it (including us, we didn't want to get hit from behind!). Riding between hundreds of bikes in close proximity at speeds exceeding 150km/h can be nerve wrecking to say the least! Kermit was holding on tightly and I made sure I made no sudden movements. While all this was happening some Supabikes came wheeling past the group at what must have been around 200km/h.

Yup, this was an experience for sure.

Afterward we hung around for a while to watch some wheelies, stoppies, burn-outs etc. 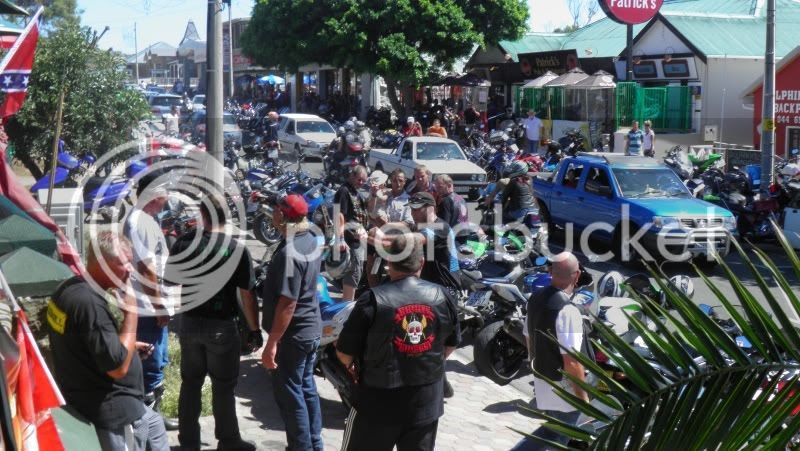 It's a mass party with huge amounts of speed, daredevils and alcohol. It's a bike rally.

After about an hour we decided to get on our way. It was cool to see for a couple of hours, but I'm not one for crowds. I certainly would not enjoy doing this for three days running. Maybe I'm just not a Rally person.

So that was our "Buff" experience. Totally different from the Harley Rally I've been on.

But the guys seemed to enjoy themselves. Good on them.