.
The next morning I rode back home with only one leg stretch stop in 100km.

I have been using the bike daily for a week and was really starting to get used to it. Unfortunately after my ride home from the Rally the battery was flat again and so my time with the bike came to an unexpected end. This bike would have to be trailered back to Cape Town.

All in all the Rally was nice. Lots of people warned me about lots of things before I went - noise, drunk people, fights etc. I didn't see any aggression. There was drinking (obviously) but actually there were very few falling down drunk people. Maybe 10 in a group of a 1000+ people. Sure everybody points and laughs at that and so that's one of the things you remember, but it's really isolated events. There was noise yes. Lots!

Going to a Rally is like going to a big sporting event. Some of the spectators might be doing stuff you don't identify with, but are you going to stop watching sport because of the actions of those few? I think not. The vast majority of people there were just bikers enjoying each others company. Would I go again? Sure! If I had to cover another event I'd be glad to go. It was a hoot! Would I go in my own time? Probably not. Not because of anything I didn't like, but I have less and less time to ride (for myself) these days. If I can have 3 days on my bike I'd rather do something like our Moordenaarskaroo trip than sit in a caravan park. Ride more, see more, sleep under the stars. But that's just me.

The Bike: What a lovely bike. Smooth, fast, good looking. The techno-freaks especially will love this bike. It's not as fast as a Supabike but it's plenty fast enough. Just to give you an idea, when you get on the off-ramp to get onto the highway and you gun it you travel at speeds in excess of 200km/h before you actually get onto the highway. Or so I am told...

Compared to Supabikes it's more comfortable, more of an everyday bike. Would I personally buy one? If speed was 'n big part of my riding yes, but it's not. I prefer something more comfortable with an upright seating position and good wind protection (maybe I'm getting old?

), not to mention something that will not limit me to tarred roads. So it's not for me, but nevertheless I really enjoyed it while I had it. It's a pity the battery packed up.

A last photo. This is the same spot where I took a picture at the start of the adventure. What a "different" week this has been! Road bikes, high speed, patches, Rallies and now trailering bikes. 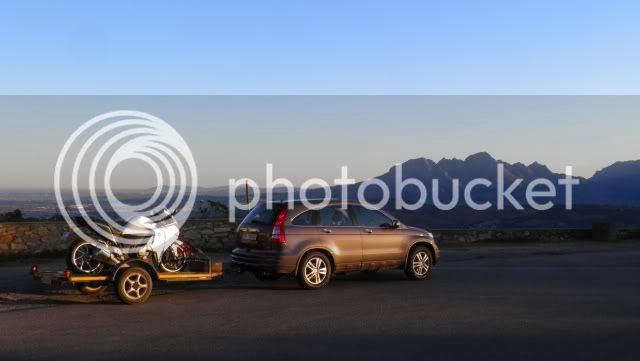 It certainly didn't end like I thought it would.

The trailer came in handy though as I had to cart two bikes and 'n bus back to George. I was VERY excited about the next bike I had to test. I've been waiting almost a year for another chance to ride this baby...

Now this is a whole different kettle of fish! 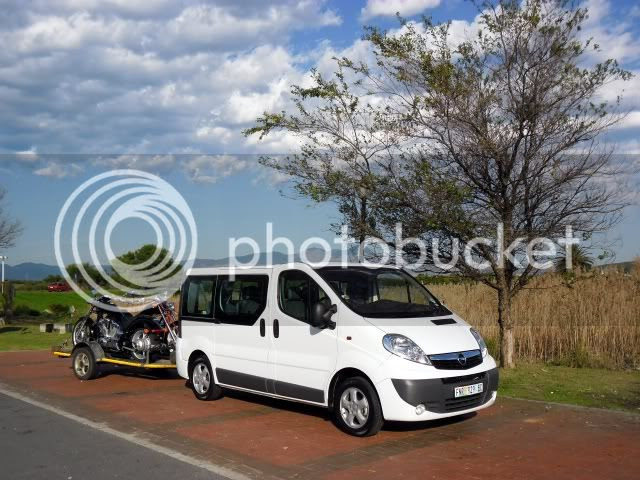