This is something different. Not a trip report, but rather an informal report on a comparison we recently did.

I include this on my blog because I believe that at least the South African readers of my blog will find this interesting. 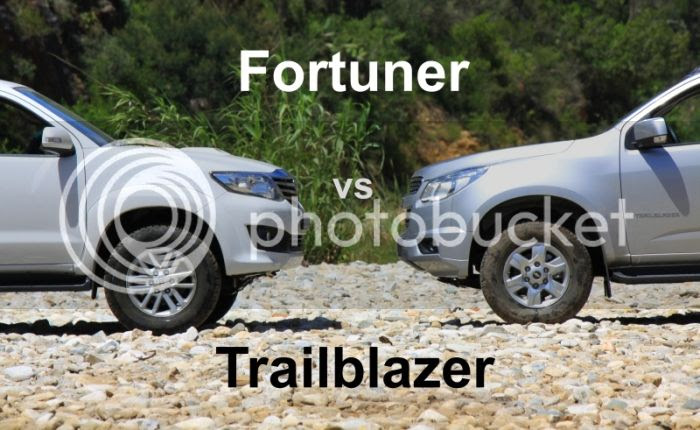 OK. Let's get the basics out of the way first.

The comparison involved the Toyota Fortuner 2.5 D-4D 4x2 and the Chevrolet Trailblazer 2.5 LT 4x2. These are the base / budget models of their respective ranges.

The vehicles were made available by the respectivencompanies to the press fleet in Cape Town.

The comparison was done by myself and Steven de Vries. Photography was done by Kirsten of Shooting Spree photography.

This post was meant to be a casual post just to share some of my thoughts, but it turned into quite a lengthy post. The article will be in the Motor Burger (Garden Route area) on Thursday (15/11/12). Steven's article will appear on his website Left Lane soonest.


Specs on a screen does not however tell the whole story. And so the day started comparing every thing we could think of. 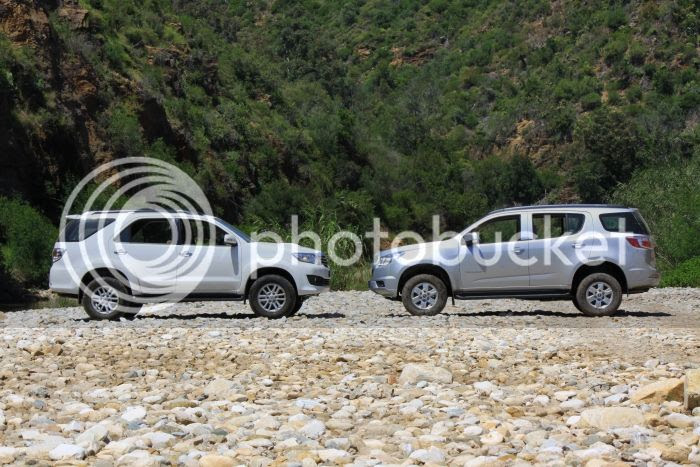 Being the cheapest models in the range you'd expect these vehicles to be pretty basic. Both however had things like AC (front and rear), electric mirrors and windows, sound systems etc. The “feel” however is different. In the Fortuner it's clear that you are in the basic model. The sun-visor for instance does not have a mirror. The Trailblazer on the other hand not only has mirrors in the visors, it also has lights that come on when you open the mirror. It's a small thing, but when the vehicles are next to each other it seems like you really get the bare minimum if there's not even a vanity mirror. And the differences don't stop there. The Trailblazer interior feels more modern / fresh and even though this is the base model it comes with luxuries like park distance sensors, as well as Bluetooth connectivity for your phone and even Cruise Control, which you can control from your steering wheel. The Fortuner has neither of these, and only basic controls on the steering wheel.

The sound system in the Trailblazer performs marginally better and sports 6 speakers to the Fortuner's 4. Both sound systems has USB and Aux ports, but in the case of the Trailblazer it's a mini-USB, which means you need an adapter to charge your phone / camera / etc (I use USB ports extensively and definitely prefer the standard size). I've heard opinions that the Trailblazer's seats are more comfortable, but to me it was much of a muchness. Some other miscellaneous comparisons include 11 cup holders in the Trailblazer compared to the Fortuner's 4. Why 7 people would need 11 cup holders I don't know, but Chevrolet certainly didn't hold back on the basics. The basic Trailblazer offered more than expected from a base model and outshines the Fortuner in this regard. 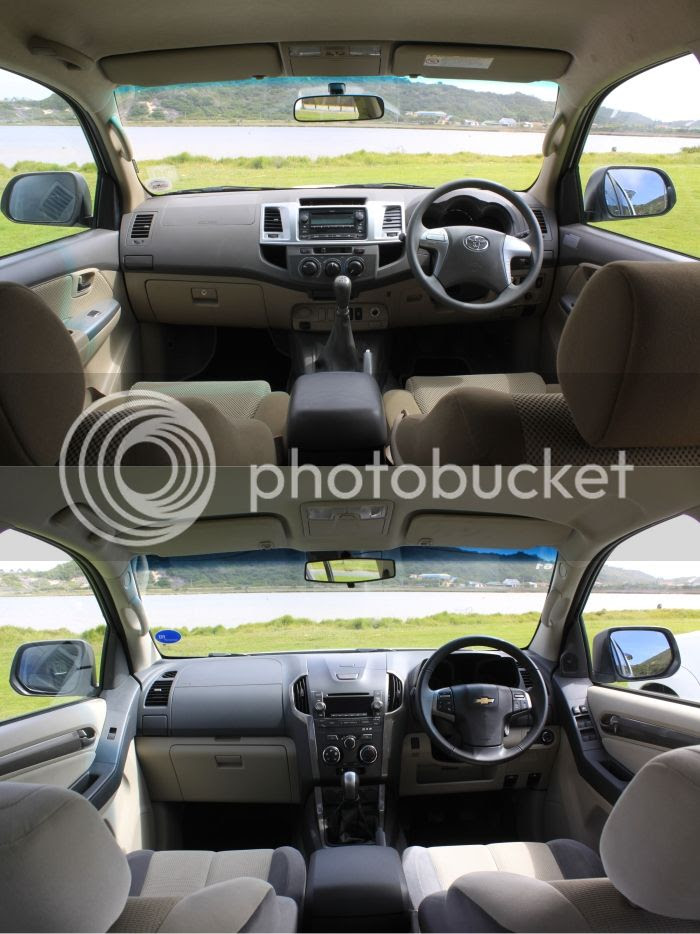 Space-wise the Fortuner is slightly bigger. I'm a pretty big guy (not in the good sense) and I felt like I had a little more space in the Fortuner. With the front seats moved all the way back the Fortuner had more leg room in the rear. Much has been said about the 7 seats and how they fold away. The Fortuner's 3rd row folds up to the sides and the second row forward, while the Trailblazer's rear seats folds neatly into the floor and the 2nd row flush with them. This creates a lovely level loading bay (enough space to sleep in).

The Fortuner's loading bay is uneven and probably less user friendly, although the actual volume of the loading areas are probably pretty even. In our test Fortuner the rear seat rattled while folded up. 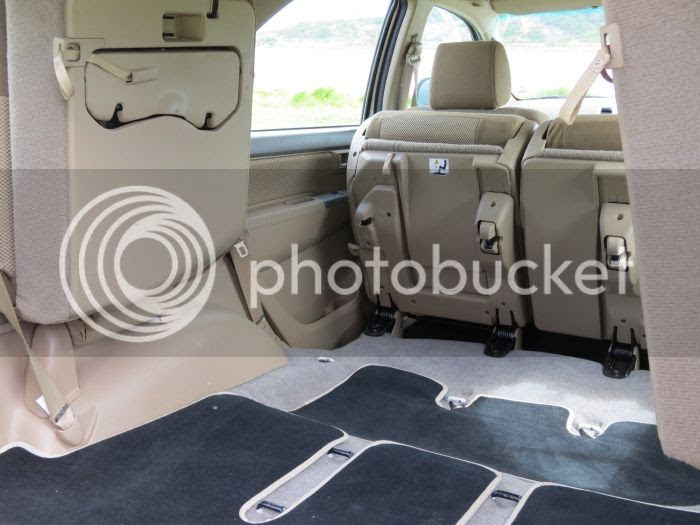 On gravel both are comfortable, but we specifically wanted to compare the vehicle behaviour on loose corrugated gravel in turns. There is a specific road I travel on often that really tests a vehicle with a “loose rear” (I can already see the anti-Toyota fraternity wringing their hands for this one...). This test was done in safe conditions with marshals (do not imitate this at home!). The Fortuner had no problem negotiating these conditions and took it in it's stride. Unruly Toyota behaviour in this regard is grossly overstated. Of course you can get out the rear if you want too (like with any RWD vehicle) but the Toyota was no worse than the Trailblazer in this regard. In fact, it was better. Why? Because the Fortuner has Traction Control while the Trailblazer does not. We turned the TC off during the test, but when you get really enthusiastic the TC would re-engage and correct the vehicle. In the Trailblazer we did not have this safety net. Before another undeserved rumour is born I have to stress that neither vehicle felt dangerous or unstable. Both have ABS/EBD/BAS and felt perfectly stable. We gave this one to the Fortuner, because in a situation of sudden loss of traction TC would be better to have than not. 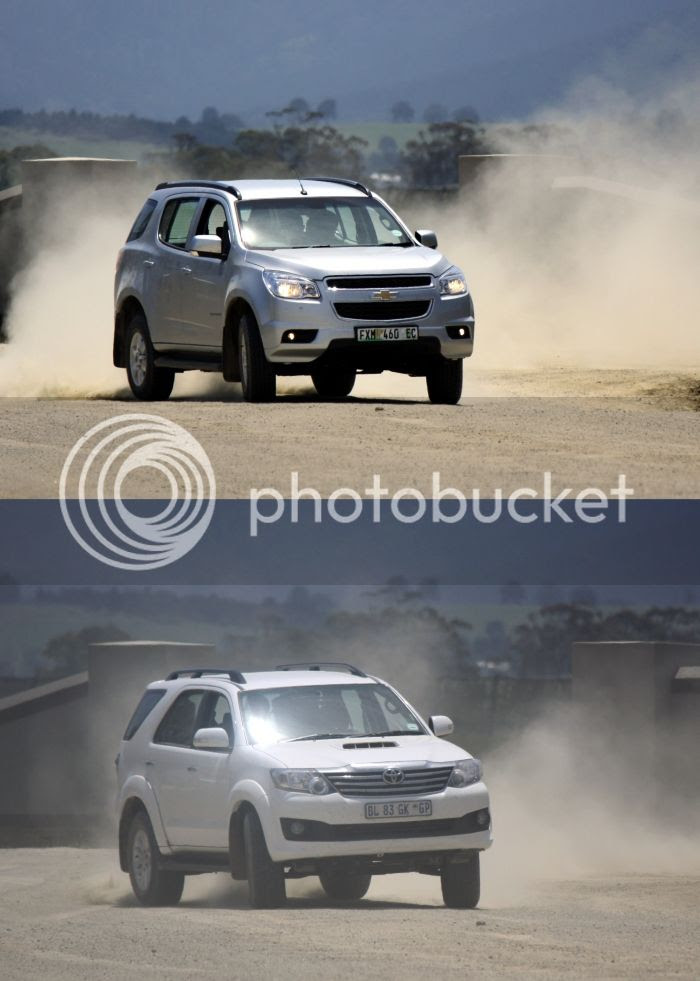 On the open road the honours goes to the Trailblazer. Stephen drove the Trailblazer from Cape Town to George on Friday and the Fortuner from George to Cape Town today. In his opinion the Trailblazer is more comfortable long distance, easier to drive at maintained higher speeds, has slightly better fuel consumption and of course offers Cruise Control which the Fortuner does not. Couple that with a much better towing allowance and this might be the vehicle of choice to go on holiday with from Gauteng. 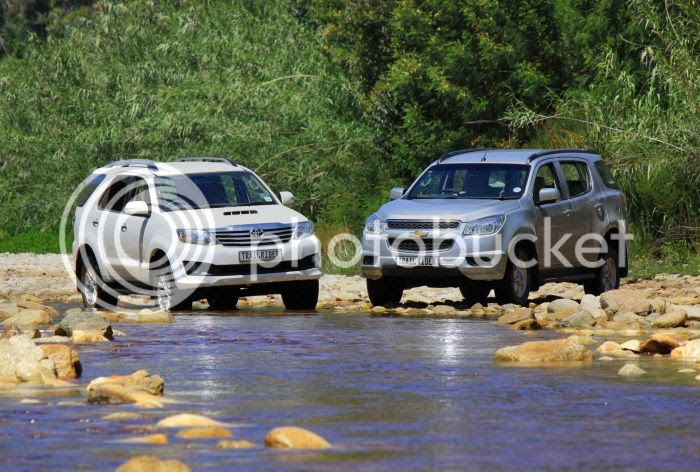 The typical 4x2 is not built for serious 4x4 routes. Being Sport Utility Vehicles though we had to take them off-road a little bit. We have a section of road near Groot Brak that runs through a river and gets washed away often. It's a very cool spot to take photos so that's where we headed. But first: 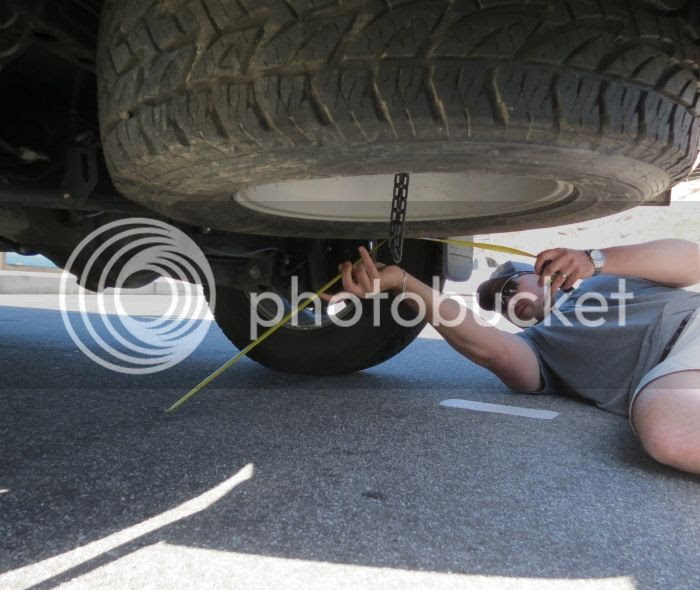 At the river we unloaded Kirsten and proceeded to the river for some nice set-up shots. I drove into the riverbed and slowed down to allow Stephen in the Fortuner to drive next to me. The rear wheel caught a hole and I instantly knew I was in trouble. I had almost no momentum and ended up stationary. I rocked it forwards and back, but the Trailblazer only dug in and could not get out. We cleared the area around the wheels, tried to insert stones for traction etc, but no matter what we tried the Trailblazer was stuck. 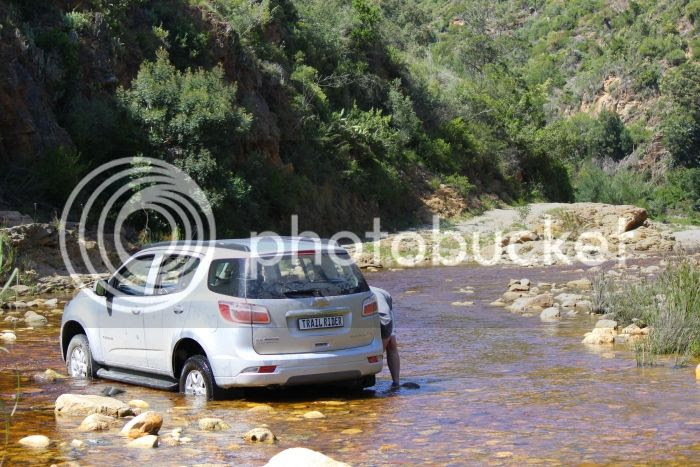 The one time we needed a diff lock... Eventually I took the Fortuner to fetch a rope from the nearby farm. By the time I got back some SA 4x4 forum members already happened on the scene and Jeanvn was busy recovering the Trailblazer. You can imagine the banter. 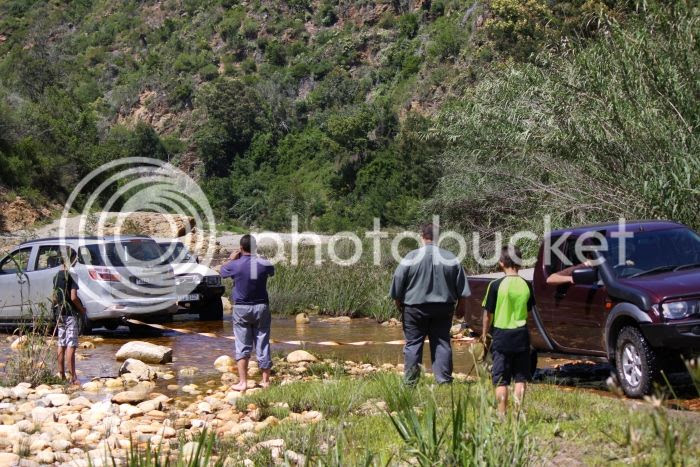 After we recovered the Trailblazer we continued with the photo shoot and both vehicles went through the riverbed several times. The Fortuner also dug in once, but the diff lock was engaged and the Fortuner drove out. The difference between having it and not cruelly illustrated.

We got some cool shots: 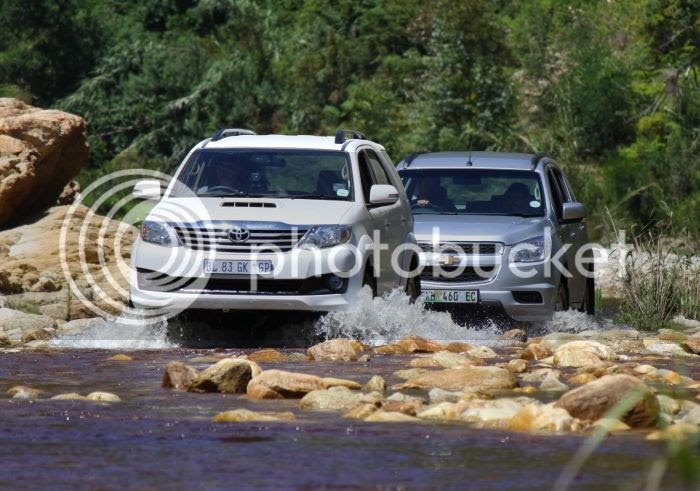 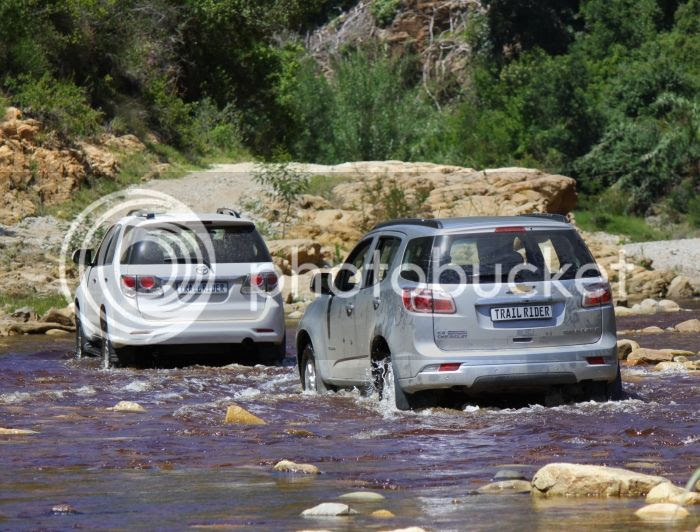 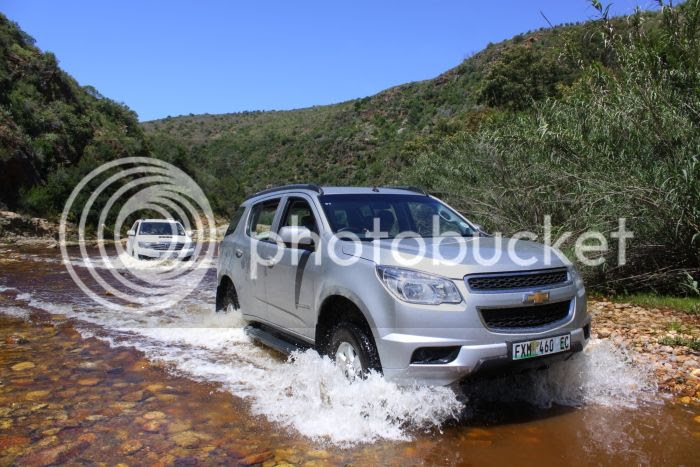 The idea behind the comparison never was to determine a winner. We merely wanted to get the new Trailblazer next to a Fortuner to see if it was a worthy competitor to the vehicle that absolutely dominated the segment until now. And worthy it is. With a strong brand and a good dealer network the Trailblazer will give the Fortuner stiffer competition than previous competitors did. And competition is ALWAYS good for the consumer.

This comparison involved 4x2 vehicles. 90+% of these vehicles are likely to end up doing school runs and park on mall pavements, with the occasional long distance holiday trip. The Trailblazer has park distance control, cruise control, a more modern cabin with things like bluetooth, runs more economically and has longer distances between services. These are things the target marked is likely to use often. The Fortuner has Traction Control and a diff lock (available on the Trailblazer as an optional extra), but the typical city dwelling 4x2 owner is unlikely to drive into a river often.

In my opinion the 4x2 Trailblazer makes a very strong case if you're a city dweller. If you live on a farm and travel on gravel roads daily, or like to venture off the road on weekends, the Fortuner might be your choice. Whichever way you go, you're unlikely to be disappointed. Good vehicles both.

Thanx for This comparison. Since I saw pics of the Trailblazer have been torn between which to go for and couldnt find a decent 'side by side' comparison as you have done here. my heart was on the chevy and I think you've convinced me.
just one question-if you can comment on the 3rd rows seating- which is better(more room),can an adult sit relatively comfortably? thanx again

Im thinking to buy a car.. between trailblazer, fortuner and montero..which us bigger in size...?

We just bought a Chevy Trailblazer but the first thing I did before deciding to buy it is test the 3rd row seat...the legroom is perfectly fine although my head hits the roof, but not as uncomfortable as I thought...im 6'4" if anyone is asking...