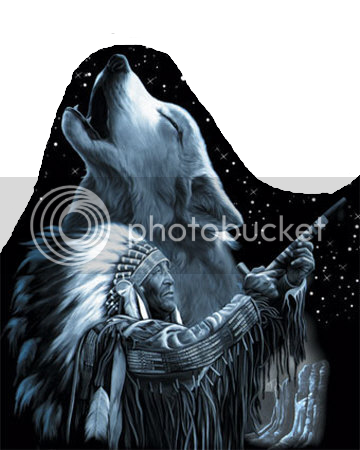 The Wolf Moon is the name for the full moon that occurs in January. This name is popularly attributed to the Native Americans. This is the time of deep snow and midwinter, when hungry wolf packs howled outside Indian villages. In fact, the Sioux name for the month January also refer to the wolves. Literally translated it means "wolves run together".

Wolves usually run in packs, but there are exeptions. These are called the "Lone Wolves". As an animal, a lone wolf is a wolf that lives independently rather than with others as a member of a pack. As such, Lone Wolves have always needed superior intellect and wit to survive, since they don't have the security of the pack. However lone wolves have difficulty hunting the bigger prey. So during the lean times (winter / January) they sometimes team up with others to bring down prey.

In the biking community you also find the term "Lone Wolf". Being a Lone Wolf simply means that you don't ride in a MC and aren't a 1%er. It means you are an independent who rides for the joy of riding. That is a pretty accurate description of myself, as well as my friends who ride. We are a pretty cool group of riders from all walks of life. When it comes to riding and rides we have a loose association, you join when you want and it matters not if you do or don't. There are no leaders and there are no rules. We are all lone wolves by choice who run in a pack occasionally.

So why am I boring you with all the Wolf talk? Well, it's January. When "wolves run together". The first full moon of the month - The Wolf Moon - rises on the night of the 26th, which happens to be on a Saturday. And we need a reason to ride (yeah, right!).

It took one question - "Do you know what the Wolf Moon is?" - and the ride was on!

Destinations were discussed. It was decided that the best place to witness the Wolf Moon would be somewhere in the Great Karoo. A destination was decided upon, the departing time set.

And so this ride came to be. And who knows, it could turn into a annual run. The pack already has some ideas for next year...