Even though I heavily favour Dual Sport bikes, every once in a while I test ride a bike that just stirs something in me. This was such a bike. 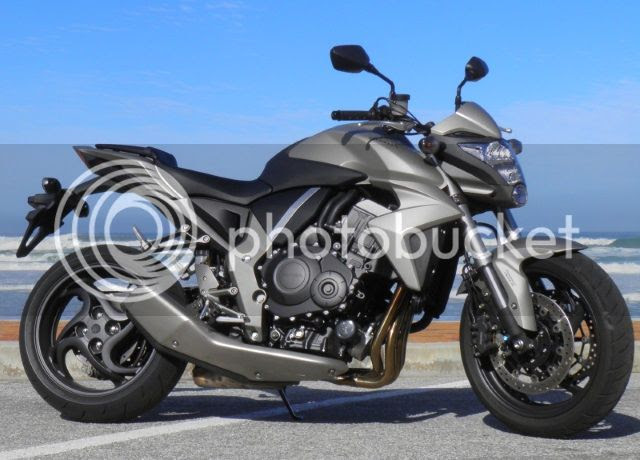 Most road bikes are way to small for my, uhm, "build". I look at them, sit on them etc, but seldom fit on them.

My first encounter with the Honda CB1000R was at the Honda Road Show in George. There was an instant attraction and I found it a good fit. Took it for a ride en enjoyed it immensely! 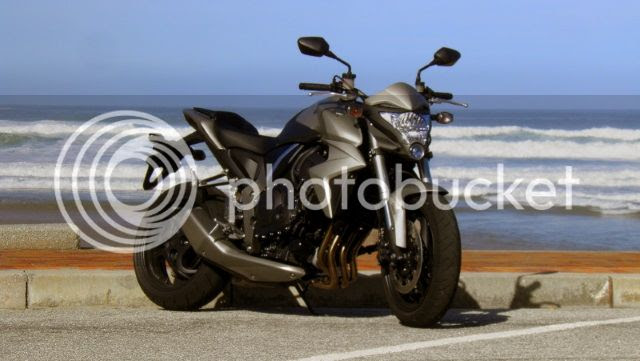 So when I had a chance to book a test unit I jumped at the opportunity. I picked up the bike near Malmesbury and decided to take a winding route back to George, heading in a hopelessly wrong direction to start off with. 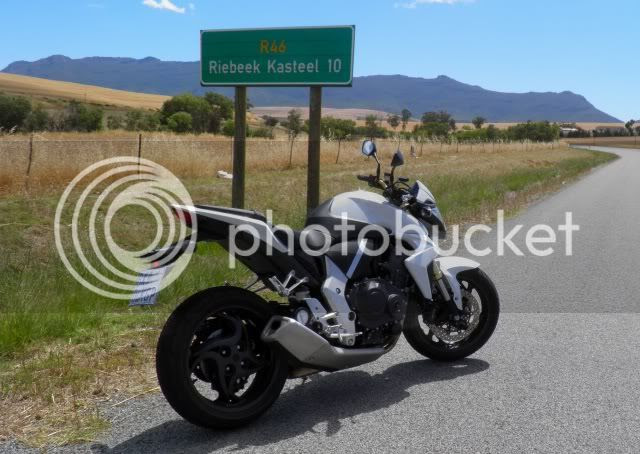 Reason? To ride Bothmanskloof Pass! It's a tar pass that runs to Riebeek Kasteel. I had a road bike, was in the area and had not ticked it off on my passes quest yet. The view North over the Riebeek Valley: 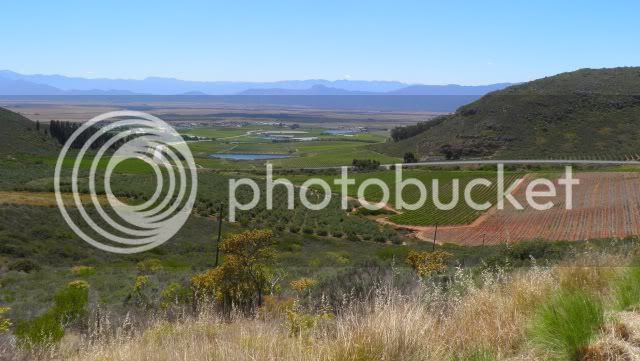 The Riebeek Valley is known for its wheat, wines and more recently olives. The town, Riebeek Kasteel, is one of the oldest towns in South Africa. It's laid out around the church and hotel. Incidentally the Royal Hotel is the oldest hotel in South Africa. 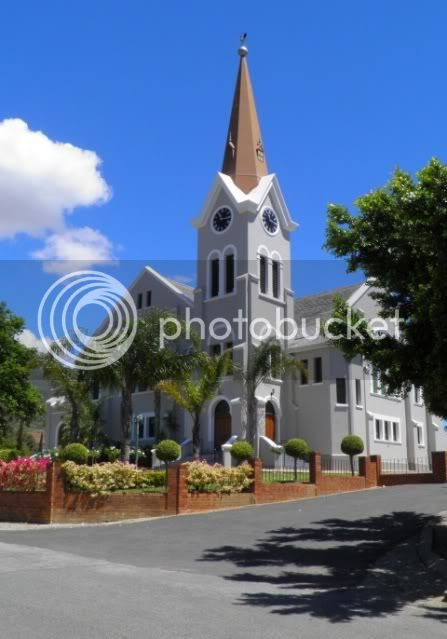 In 2009 Riebeek Kasteel was chosen one of the three most beautiful towns of the Western Cape by the newspaper "Rapport". It was also named one of the 101 Best Destinations In South Africa. Well worth a visit.

From here I set out to another South African gem: Franschhoek. 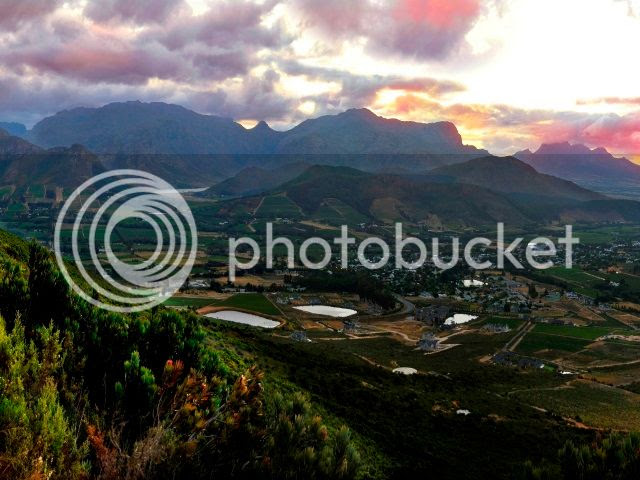 The Franschhoek valley was originally settled in 1688 by 176 French Huguenot refugees, many of whom were given land by the Dutch government in a valley called Olifantshoek ("Elephants' corner"), so named because of the elephants that crossed into the valley to calve. The name of the area soon changed to le Coin Français ("the French Corner"), and later to Franschhoek (Dutch for "French Corner"), with many of the settlers naming their new farms after the areas in France from which they came. La Motte, Champagne, La Cotte, Cabrière, La Provence, Bourgogne, La Terra de Luc and La Dauphine were among some of the first established farms — most of which still retain their original Cape Dutch farm houses today. These farms have grown into renowned wineries. Many of the surnames in the area are of French origin, e.g. Du Toit, Marais, Du Plessis, Malan, Malherbe, and Joubert. 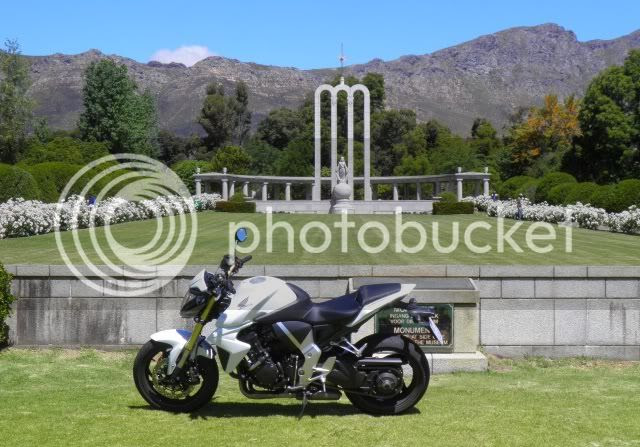 This heritage is shown today by the Huguenot Monument which stands at the end of the town. The museum nearby chronicles the history of the first settlers, with each of the original Huguenot farms having its own fascinating story to tell. The Cape Dutch architecture in much of the village is unspoilt, as restrictions have been placed on the extent of renovations and new construction in order to preserve the spirit of the original settlers to the area. Source.

I met up with my friend Dual at the historic railway station. 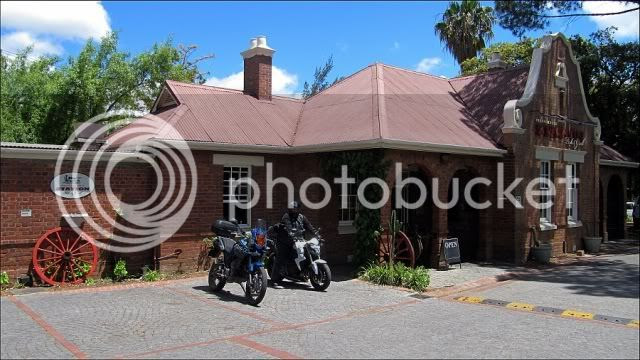 In 1904 a 27 km railway line was built between Paarl and Franschhoek to serve as an alternative to ox drawn carts for farmers wanting to get their produce to market. Steam locomotives operated along the route until diesel locomotives took over in the 1970s and then, in the 1990s, as the need for rail transport decreased, service along the railway line was discontinued.

Today it's a watering hole. 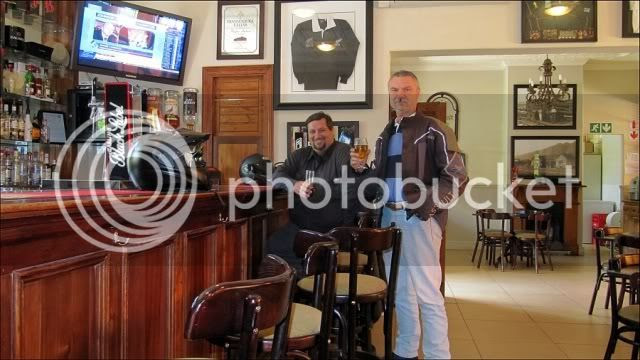 The railway line was reinstated in 2012 (after we were there) by a private operator and now sees service as the Franschhoek Wine Tram, a tourism project utilizing a newly constructed tram modeled after the open-sided Brill Trams of circa 1890 to transport tourists between wine estates in the area.

Looking at the pic above I can't help but notice that we resembled our bikes today. The one taller and thinner and the other, well, not. 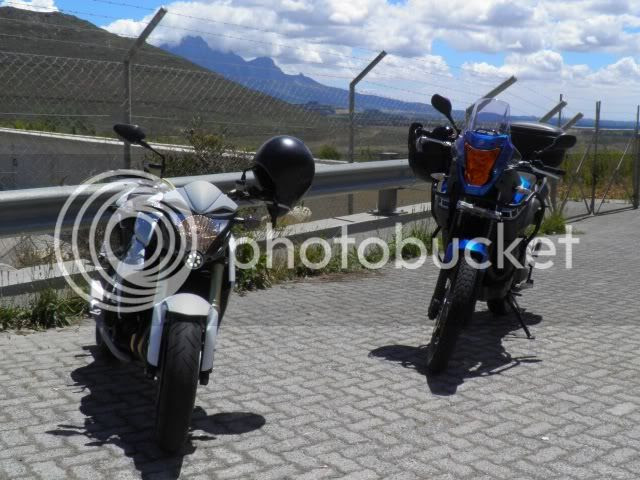 As far as bikers are concerned Franschhoek is the most famous for one thing - Franschhoek Pass!

Franschhoek Pass is located between Franschhoek and Villiersdorp, a tarred pass with tight turns, precipitous edges and beautiful views. It's a fast road frequented by adrenalin junkies, superbikes and slow tourists, which does make it somewhat dangerous. The CB1000R was made for roads like this!
(Google Earth Placemark here.)

The view over Franschhoek from the top: 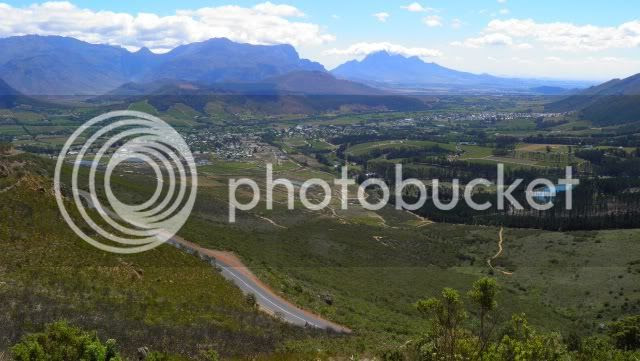 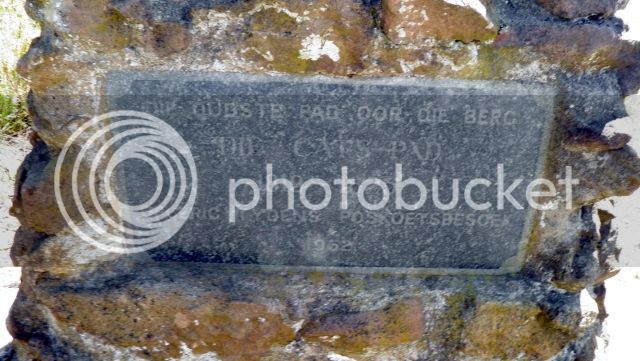 In 1818, Samuel Johannes Cats used the footprints of the elephants that crossed into the valley to calve to construct a 10,5km long mountain pass and toll road joining Cape Town and the fertile Overberg region. The mountain pass was dangerously steep for ox wagons and horse carts and in 1825 “Cats se Pad” was replaced by the Holloway pass and it remained in service for 108 years before the Franschhoek pass was built. 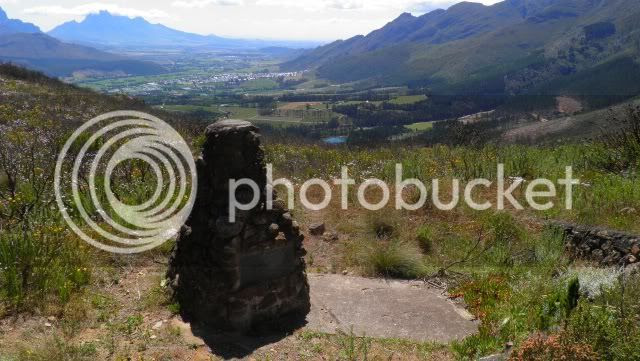 Another piece of history that survived on this pass is the Jan Joubertsgat Bridge. 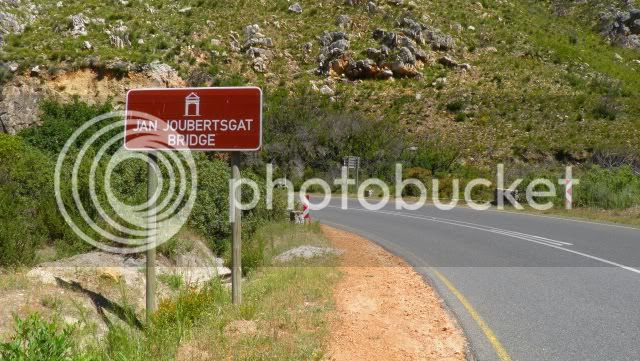 The bridge spans across a 5-metre kloof named after a frontiersman that died after an accident there in which the draught pole of his wagon broke. Built in 1825, it was incorporated into later constructions of the pass and is still in use today, the oldest stone bridge still in use in South Africa. It was declared a National Monument in 1979. 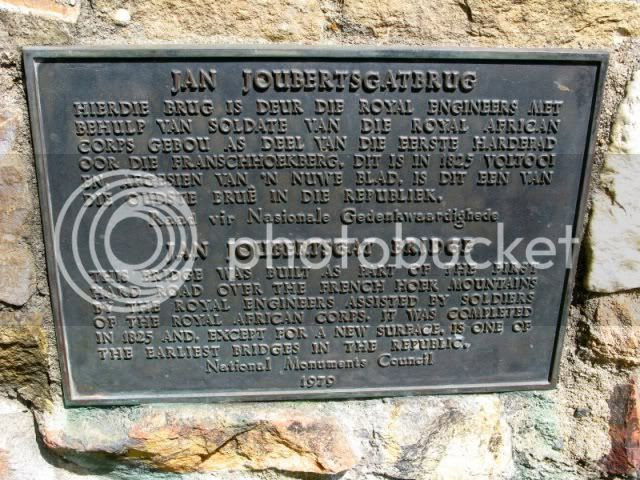 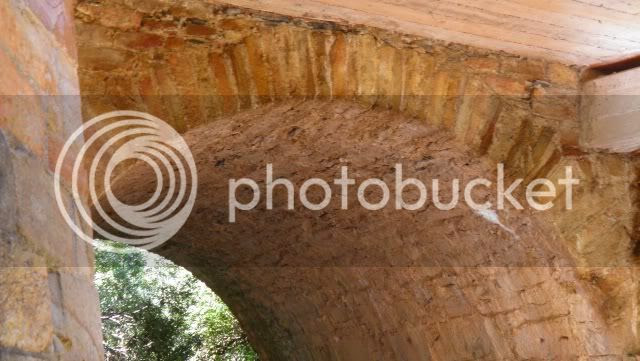 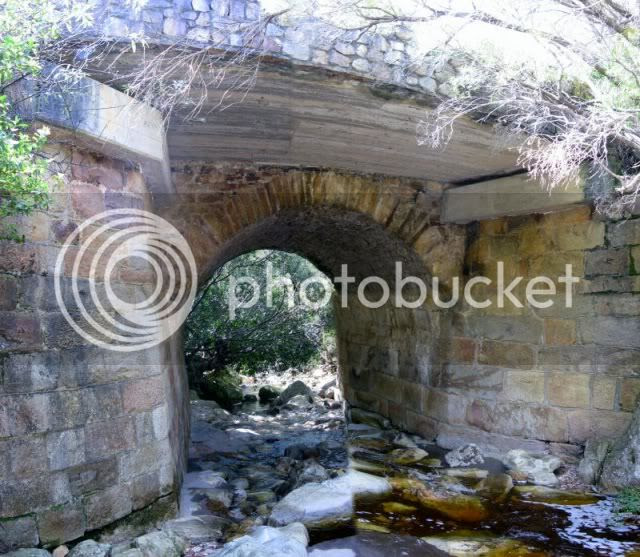 It's a beautiful spot and if you are a geocacher don't miss the cache placed here. 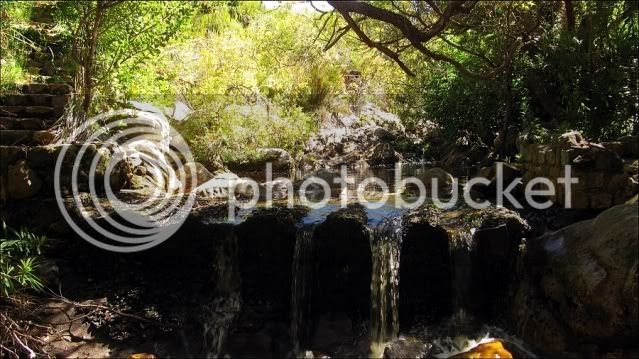 I love the history stuff, but the bike was calling. I still had to get to George so this is where the excitable CB1000R and the dependable XT660 parted ways. 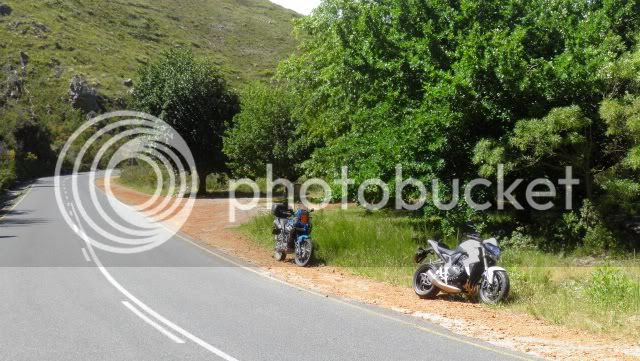 One wouldn't think that this kind of bike could be a blast on a 400km stretch, but somehow it's not nearly as uncomfortable as a superbike. The wind gets bad around 200km/h (or so I hear...) but the adrenalin more than makes up for that. Fuel consumption was on the heavy side, but lets be honest, this is not the type of machine you do an economy run on.

One of the better test bikes I've had.

Pity it was discontinued in South Africa. Now I should just get my hands on the Super Duke.