We were up just before sunrise. Luckily we all agreed that setting off early in the mornings and finishing around 3pm every day would be ideal. No chasing sunlight and setting up camp in the dark. In the late afternoon we want to be relaxing with a cold one already.

We're on holiday though so no need to "hurry up". We were content with getting up at 5am and being on the road by 7. 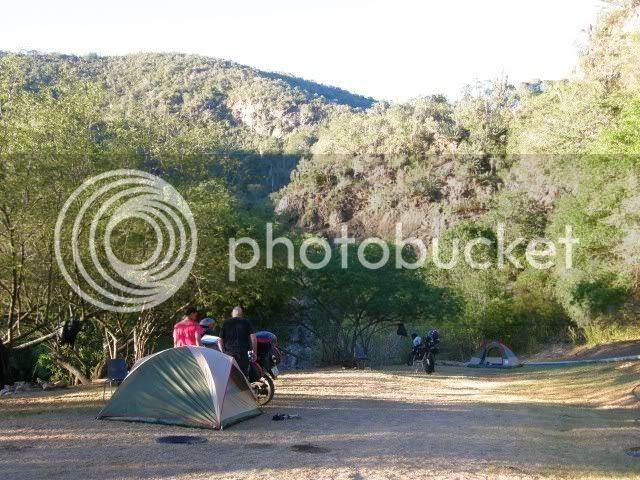 After so much tar riding yesterday it was great to start the day like this: 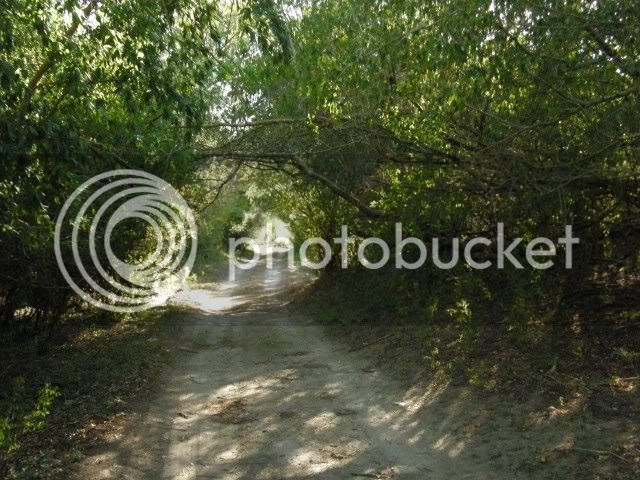 Early morning, fresh air, riding along the foothills of the Zuurberg mountains. 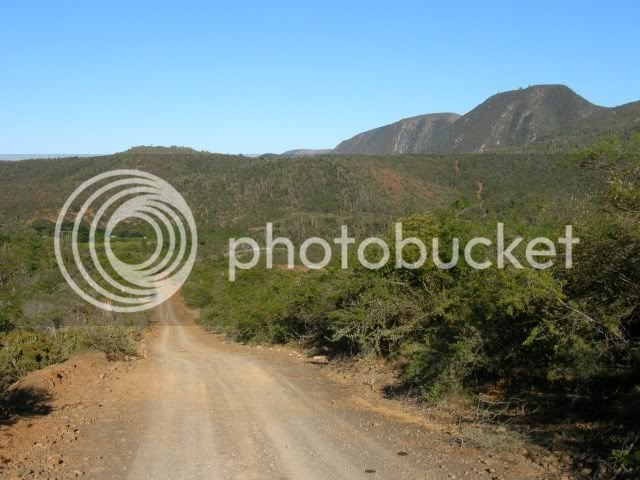 Lying in the north western corner of the Sundays River Valley, Zuurberg lies at the foot of the mountain of the same name. The historic Zuurberg Pass, almost entirely surrounded by the Greater Addo Elephant National Park, is a narrow cutting through the Zuurberg Mountains, built in the 1850s and the original main route into the hinterland via which today you can also reach the Karoo. Although the road over the Zuurberg is referred to as the Zuurberg Pass, it is in fact two passes and the first is called the Doringnek Pass. 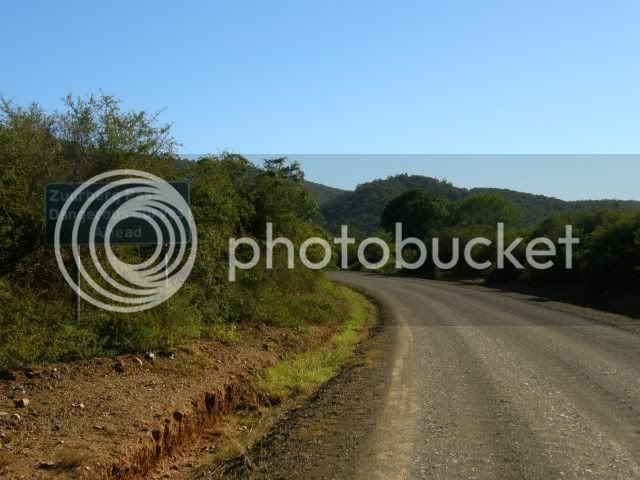 The V-Strom coming around the bend: 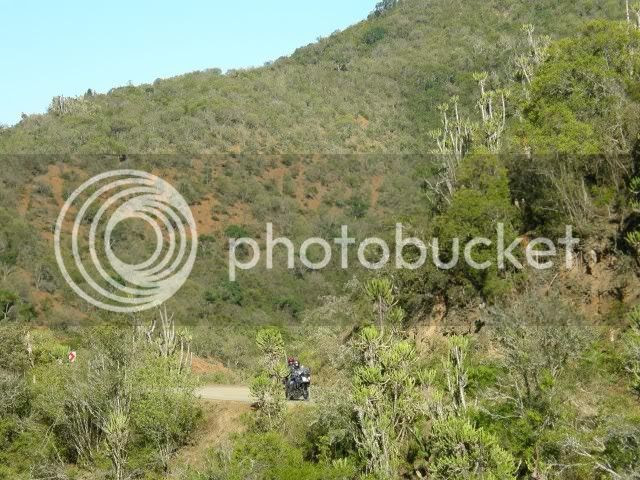 Just look at this! Doringnek Pass certainly is scenic. 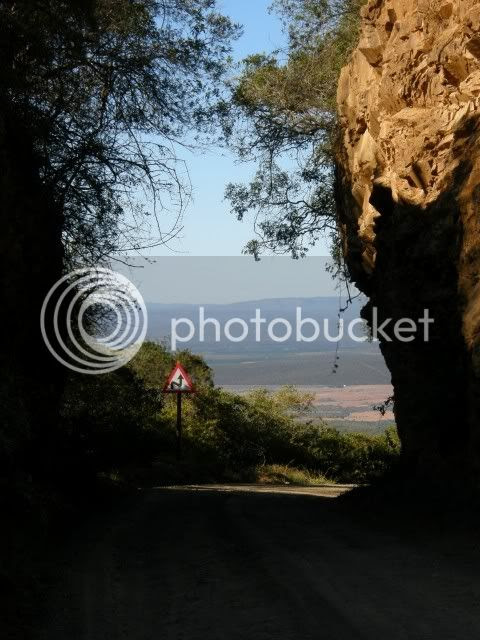 The condition of the road was a pleasure too. 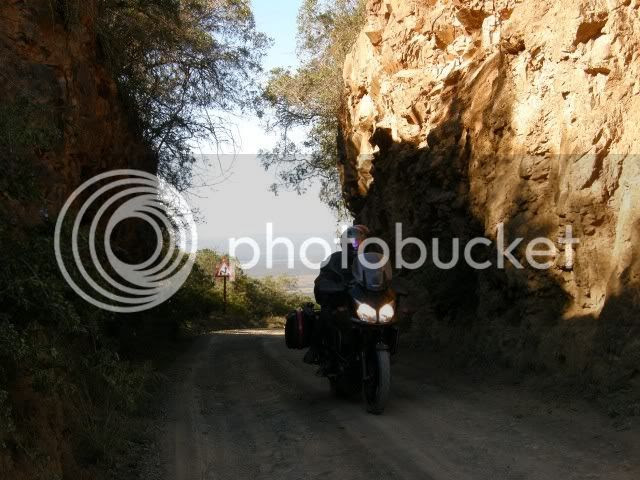 A quick stop to adjust the pannier straps. It was still early but it was extremely hot already. Any shade was welcome. 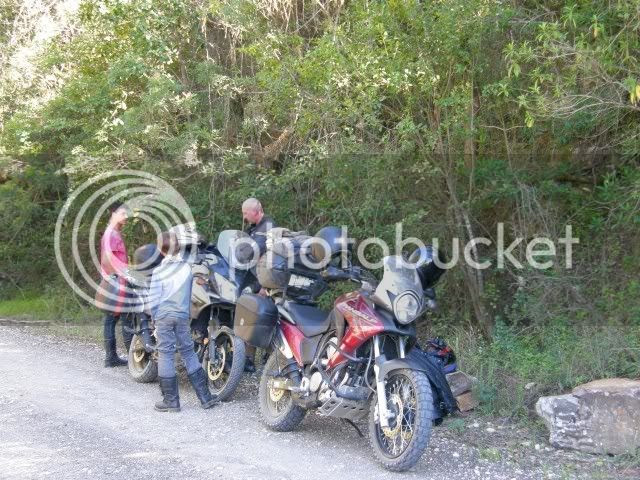 Zuurberg Pass has some interesting early history: Following the re-establishment of British authority at the Cape in 1806, the British found themselves increasingly drawn into the conflict between the indigenous peoples and the Boers. By 1810, the major confrontation was with the Xhosa on the Eastern Frontier.

There was a Commando from Graaff-Reinet, led by the Landdrost Anders Stockenström, stationed north of the Zuurberg to protect Bruintjeshoogte and Graaff-Reinet against Xhosa intrusions from the south and east. Colonel John Graham (tasked to clear the Zuurveld of the Xhosa) concluded the major Xhosa force was concentrated in Addo and summoned Stockenström to bring his force across the Zuurberg.

Stockenström responded with about forty of his men, who left their camp at sunrise on December 28, 1811 to travel south over the Zuurberg. Near the peak of the Zuurberg Stockenström's party encountered a group of Xhosa and a battle began and continued for a time, but it ended with a surprise attack on the Landdrost and his men. Stockenström and about a dozen others of his force were killed. This was in the first few days of the Fourth Frontier War (1811-12).

For those into history there is a good article about the massacre at Zuurberg by Keith Meintjies at the following link: http://www.eggsa.org/articles/Zuurberg_intro.htm 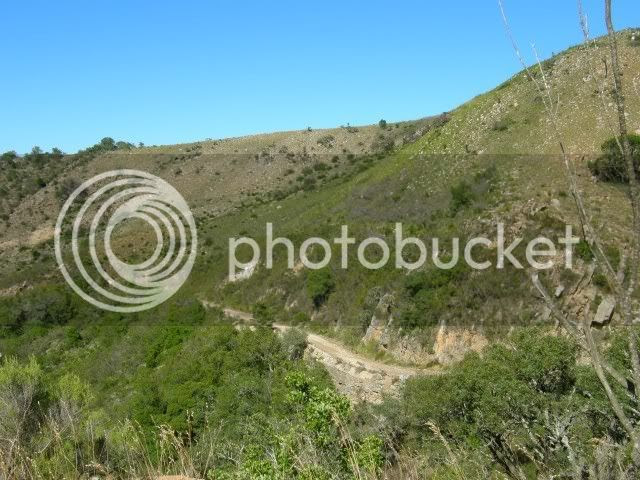 The Zuurberg Pass road was in a state not a pleasure to ride. Rocky and full of corrugations. Smidty especially was fighting the front wheel of the Strom all the way as he has road tyres on. Exhausting work in the heat. We were very very happy to see Ann's Villa!

The heat was intense by now so we bought the hot beer and a tray of ice out of their fridge. Hopefully the beer wouldn't take too long to get cold. 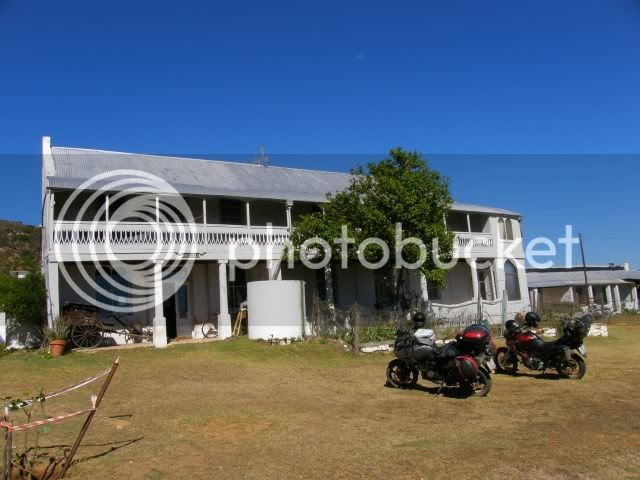 These days people traveling between Port Elizabeth and Cradock crosses over the Zuurberg Mountains at speed via the Olifants Kop Pass (R32). Much quicker and easier than in the olden days, but not as scenic. 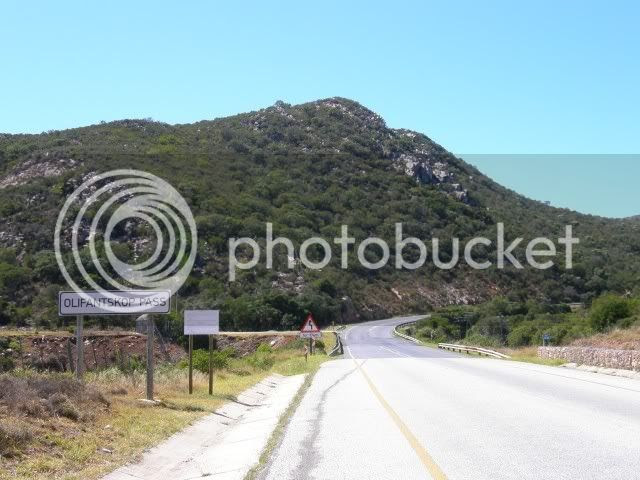 Just over the Olifant Kop Pass we turned East once more and headed for Alicedale. There are lots of roadworks on this road it's terribly corrugated. So much so in fact that it snapped Smidty's pannier bracket

This is a problem. There is no workshop in a small town like Alicedale. Or so we thought

We were directed to the house of Mr Simphiwe Hana. Smidty was sceptical to say the least

Smidty: "Hallo. Is this a workshop?"

Smidty: "Well, can you do it here in the street? Because I am not coming out of the shade!"

In a flash Simphiwe had six electrical cords connected all the way from his house across the street. A welder was brought with a wheelbarrow and a piece of scrap metal was being grinded to size to fix the pannier bracket. 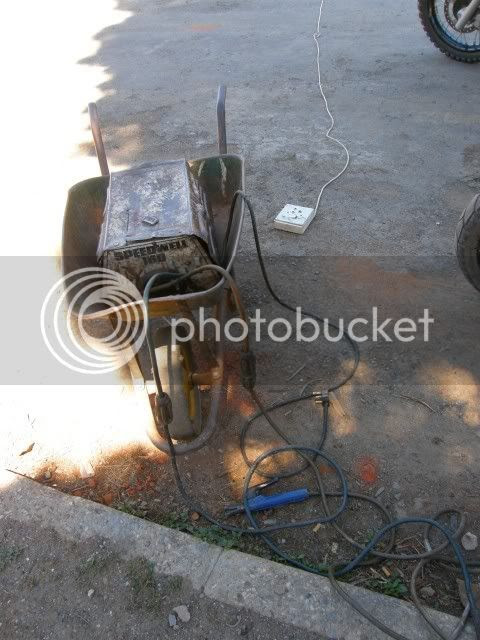 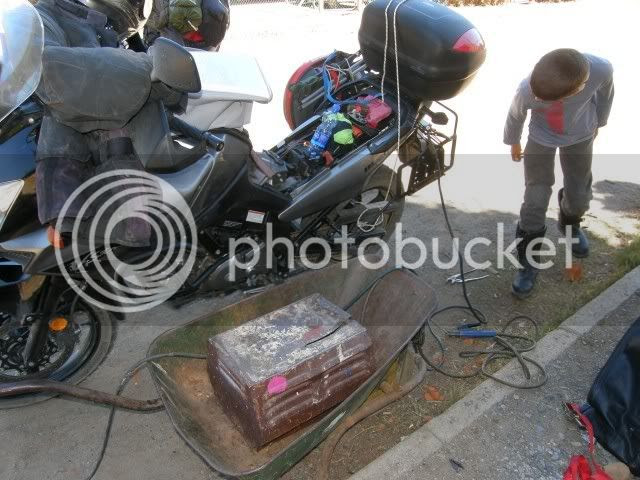 Simphiwe was also friendly enough to sharpen our blunt axe! 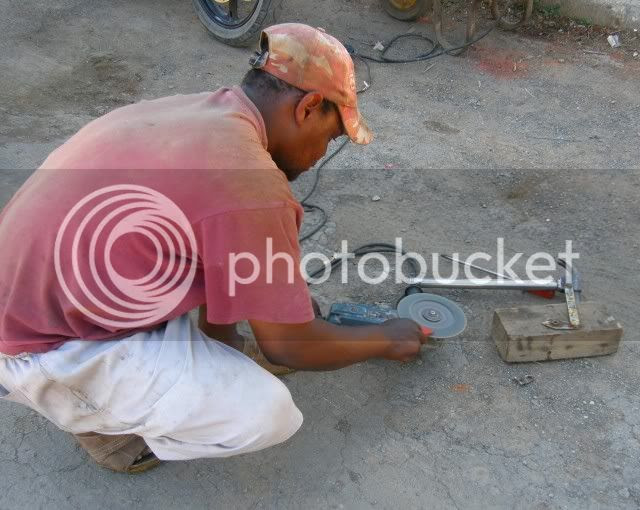 If you're ever in Alicedale support Mr Hana. He also fixes tyres

By now it was in the heat of the day and it was seriously hot! Seriously. I soaked my whole jacket and put it back on. The others thought I was daft but I know from experience it works. I also filled my Camelbak with ice and water. And so we set off. We were seriously behind schedule.

The gravel road took us to a familiar name - The Burchell Game Reserve. So I come across Mr Burchell again.

I don't know if he actually travelled here or if the reserve is just named after the Burchell Zebra. 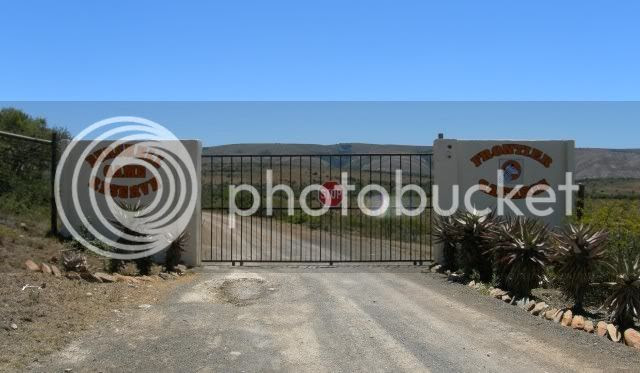 This little piece of road turned out to be the surprise of the day! I enjoyed this section of today's ride a lot! I was nice and cold in my wet jacket sucking on my ice water, but I could feel on my fingers (I have fingerless gloves) that the air was very hot, almost to the point of burning my fingers. I was riding with the visor down to keep the heat out of my face. 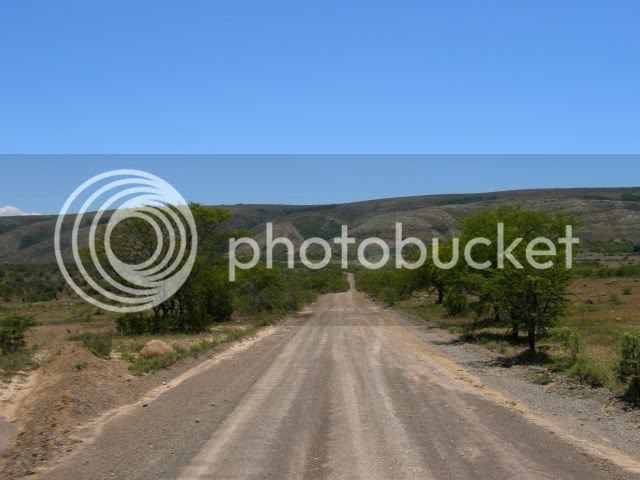 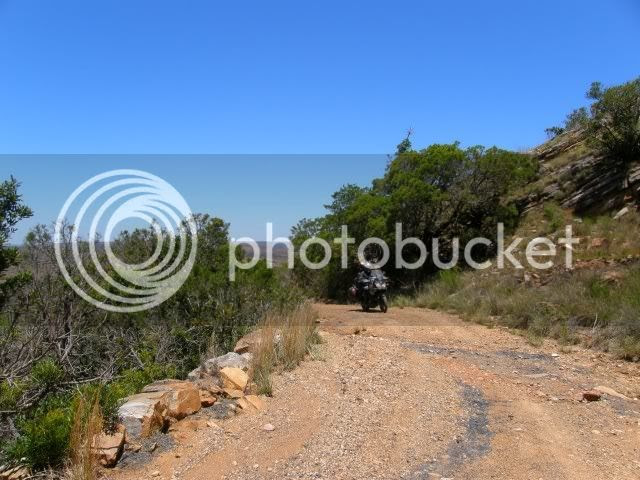 This really is a proper pass with some drystone walls and everything. Pity it has no name. It's better than some passes we did on this trip that does have names. The road surface was a little loose, but not too hectic. My knobbly tyres made it hardly noticeable. 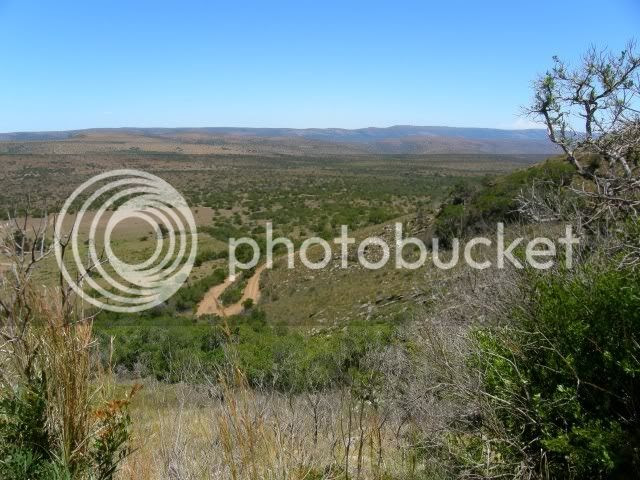 This road exits near Riebeeck East. I stopped at the "T" and waited for Smidty to catch up. When he stopped next to me and opened his visor I instantly knew he was in trouble.

Unbeknownst to me, he had been wrestling his bike on the loose all the way behind me because of the road tyres. All this while they were wearing black clothes with little water in what we later found out was 40 degree plus heat! By the time he stopped here he was dehydrated and showed symptoms of heat exhaustion.

We immediately headed into Riebeeck East and found some shade. Luckily I had some rehydrate in my medical kit and he gulped it down. I just realized once again that a person can land in trouble very very quickly. What impressed me was that Smidty never lost it. He didn't moan nor gave up. It was clear that this trip was different from what he thought he signed up for. He had the wrong tyres and was riding in conditions he was not used to. But even now, exhausted, hot and somewhat disorientated at first, he never said that's it - we're going home. He might have thought about it, but he never said it. Respect. 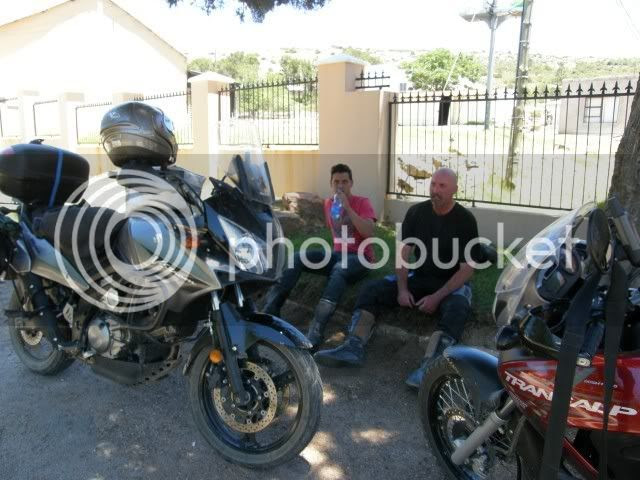 We still had 100's of km's ahead today including Katberg Pass. This was not feasible. To continue now would be madness. I had a look at the map and saw the solution: Grahamstown.

I knew that there were quite a few Wild Dog Forum Members in Grahamstown and although I've never been there I also knew that it was a bigger town. I phoned my friend Operator and asked him to alert the Grahamstown Dogs that we are on our way. We are 40kms out and would need some advise on where to stay etc. Maybe we could even score a cold beer. 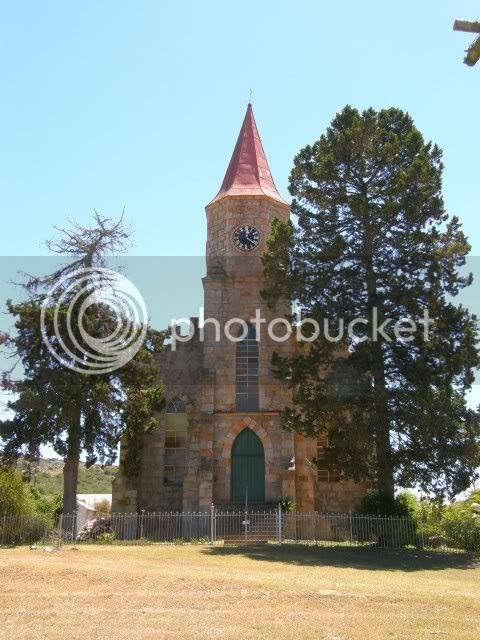 A quick hop on tar and we rode into Grahamstown. Stopping in town I found that Operator had messaged me Edgy's number and so I phoned:


TR: "Howzit Edgy! Were in town and would like to know where we can find a camping spot with a river, some grass and shade. And maybe we can even have a beer later?"

Edgy: "Uhm, there really are no good spots, but I have a B&B with a pool and braai facilities you can use. The address is..."

Can you believe this? Being part of a community like this rocks!!!

Barely an hour after being in complete misery this was the scene we were staring at: 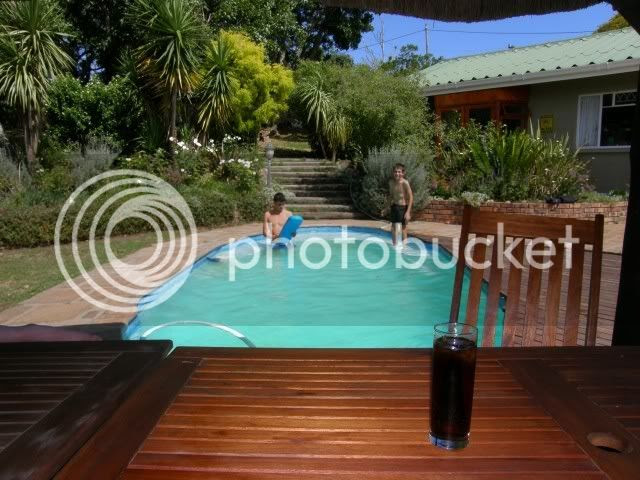 TR: "Hello hun! So what do you think of the great spot were at?"

Mrs: "So how come when I ride with we're always staying in a tent??" 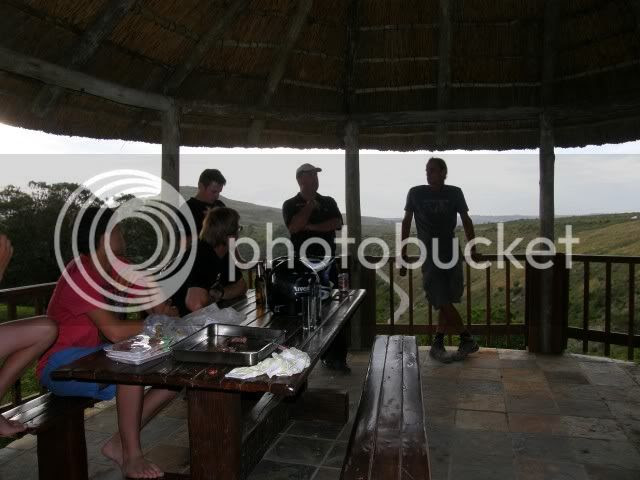 It was great to see you Big Dom, Throttle Jockey, Airborne and of course Edgy. How can we ever express our gratitude? I hope we can repay your hospitality one day.

We rode 180km today and 4 passes (including the "unknown" pass). We were way off course and behind schedule, but that is tomorrow's problem. Riding a pre-planned route is overrated anyway. From now on we "roam free."