.
I was asked to organize a ride for Honda Wing George this past weekend, a first ride with the objective that such rides will become a regular feature in this area, helping new Honda owners and indeed any Dual Sport Bike owner to meet up with like minded individuals and see what our wonderful area has to offer. This ride had a second objective also - we would put the TransAlp through it's paces for an article in the Bikes and Quads Magazine.

The route I chose included Attakwaskloof and Rooiberg Pass and stretched over 3 days and two nights, with the majority of the ride happening on the Saturday. 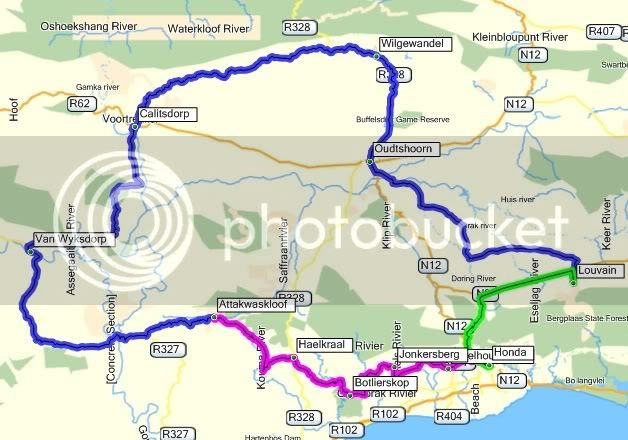 We gathered at Honda Wing George on Friday afternoon for a short ride to Bonniedale Adventure Farm, our destination for the first night. 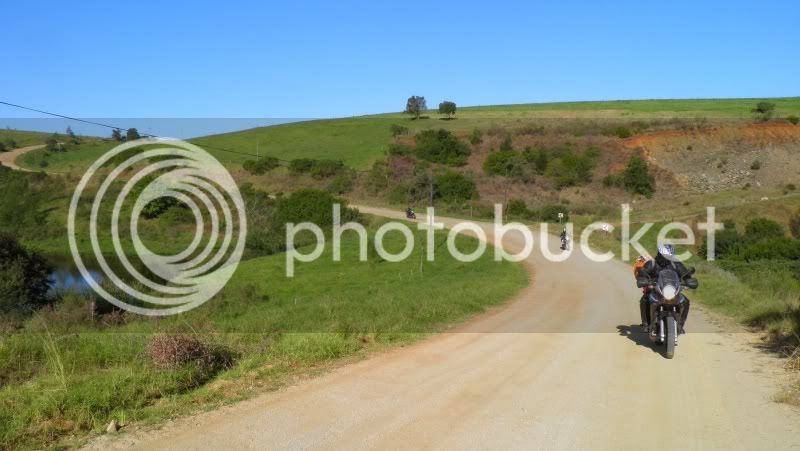 This afternoon's section is only 80-odd kilometers, but still lots of scenery and fun to be had! 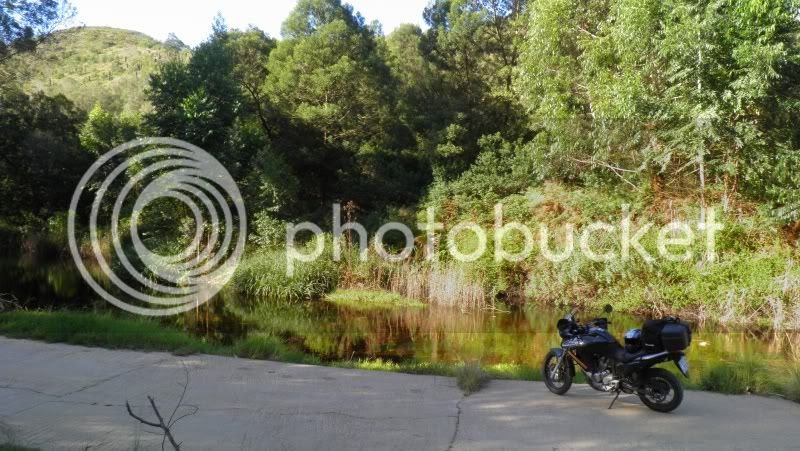 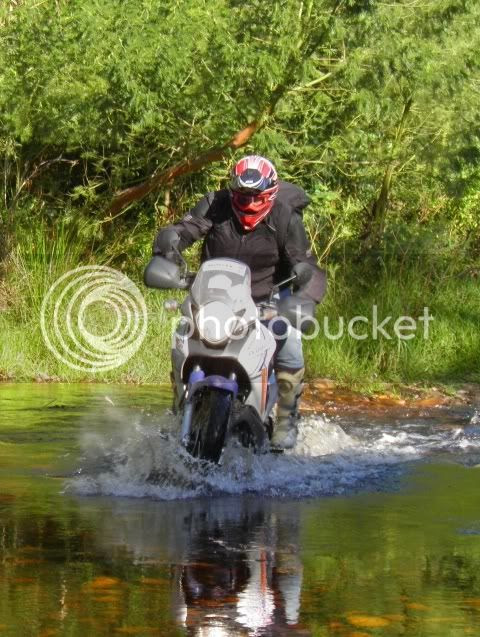 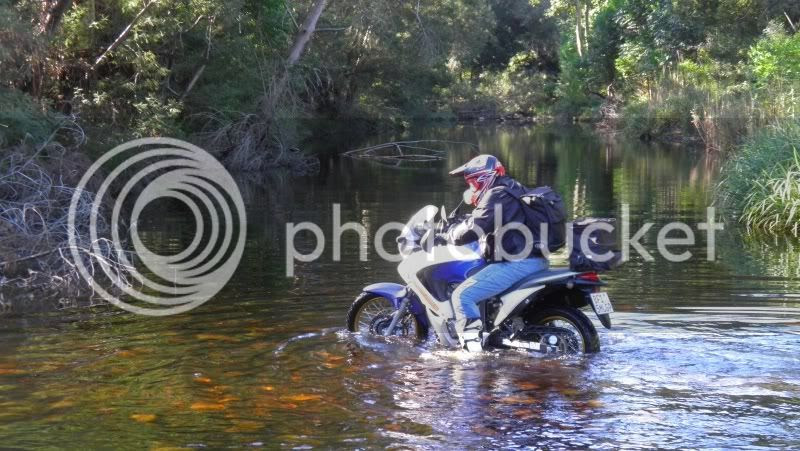 Lot's of funnies and games, but we had to hit the road again to get into Attakwas Kloof before sunset.

Which way would that be? 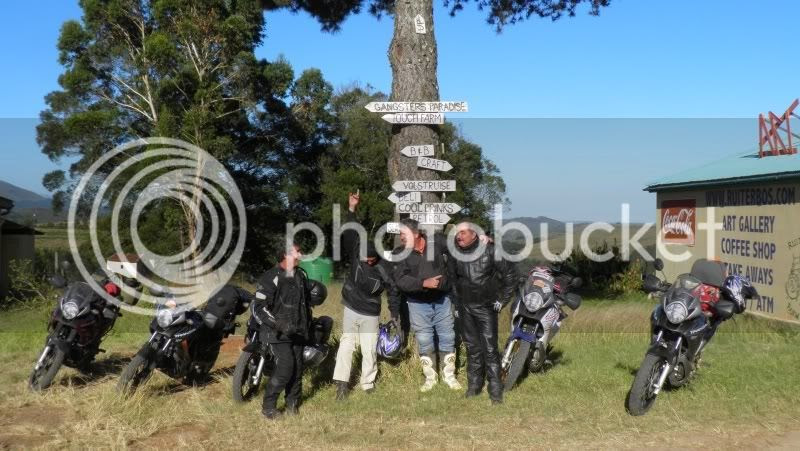 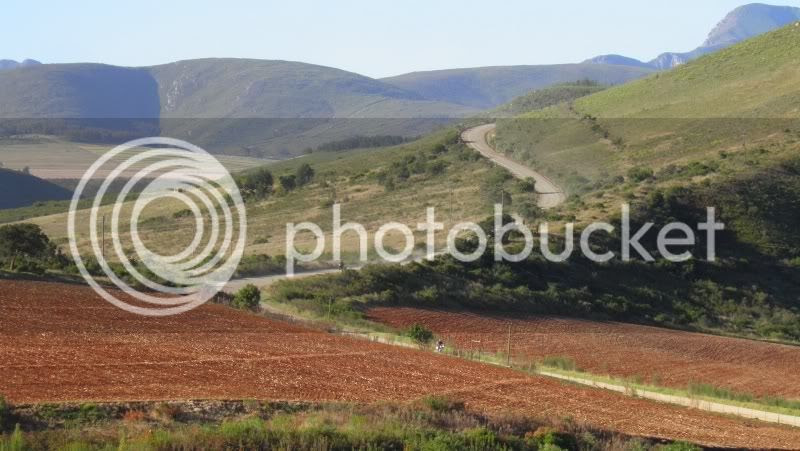 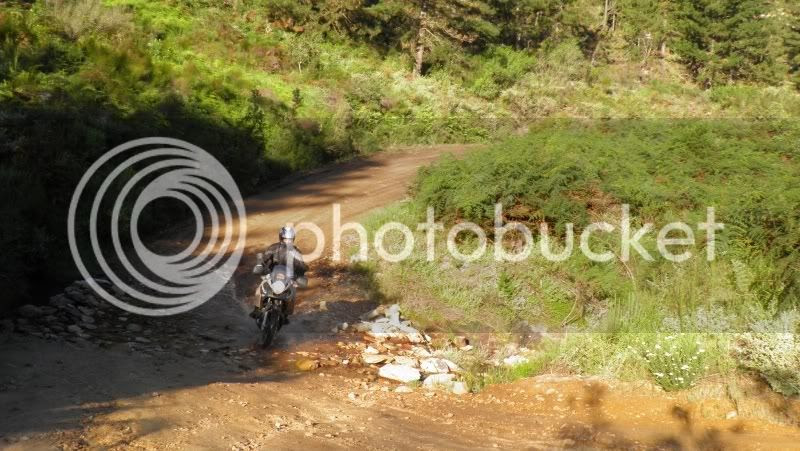 I have only ridden with one of these riders once before. This was a new group but it was evident that the group was gelling nicely already. 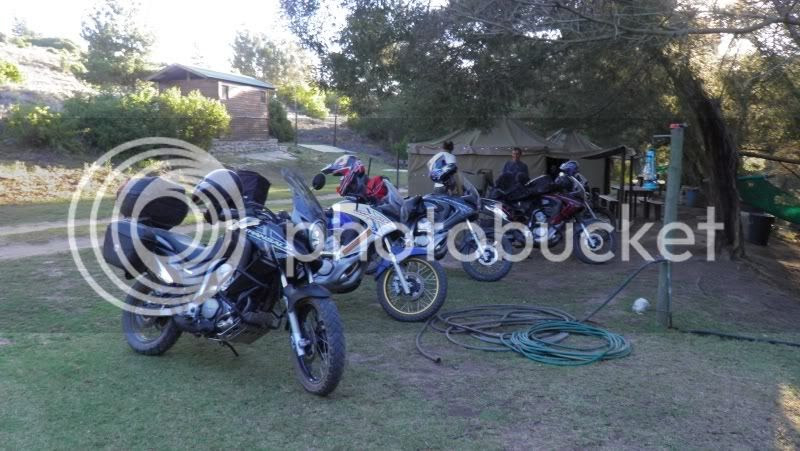 That night the fires were lit and the stories and laughter stretched well into the night.

The next morning we were up and ready bright and early.

Today we have a fantastic ride ahead. 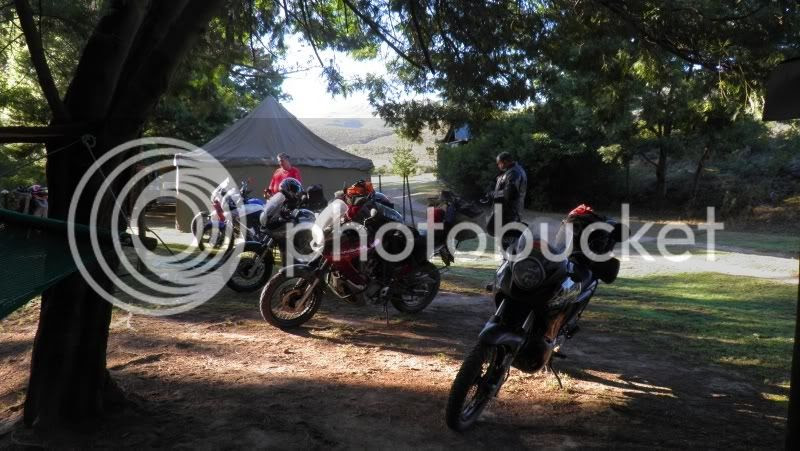 We chatted about Attakwas Kloof and it's amazing history the night before. This was the main road inland for 180 years. This section was a scenic ride and each rider was left to experience it at his own leisure. To have to ride through here in the dust of others would have been a pity so we had none of that here. 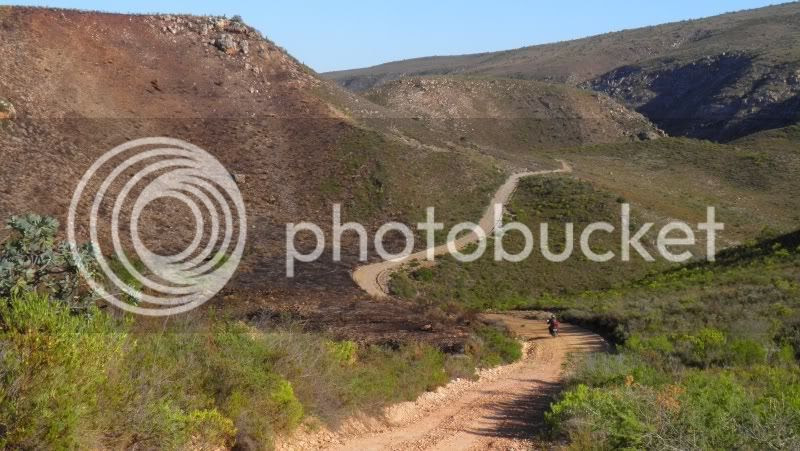 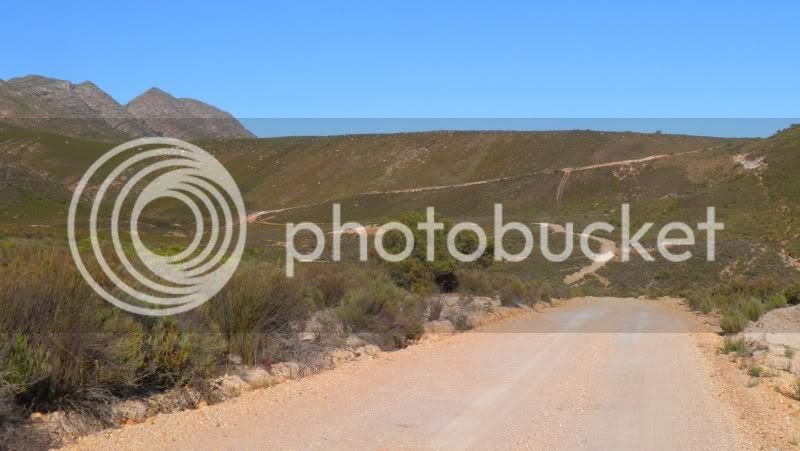 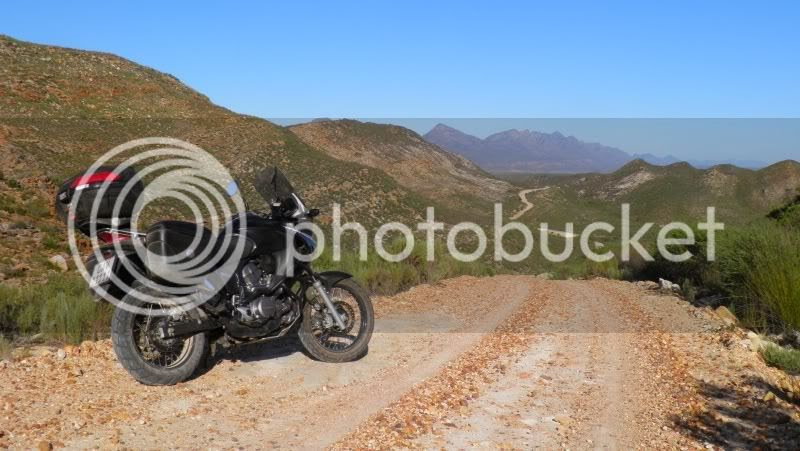 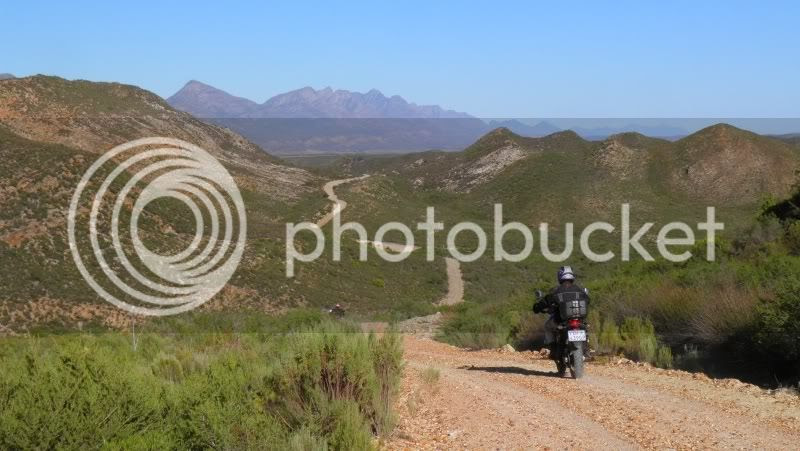 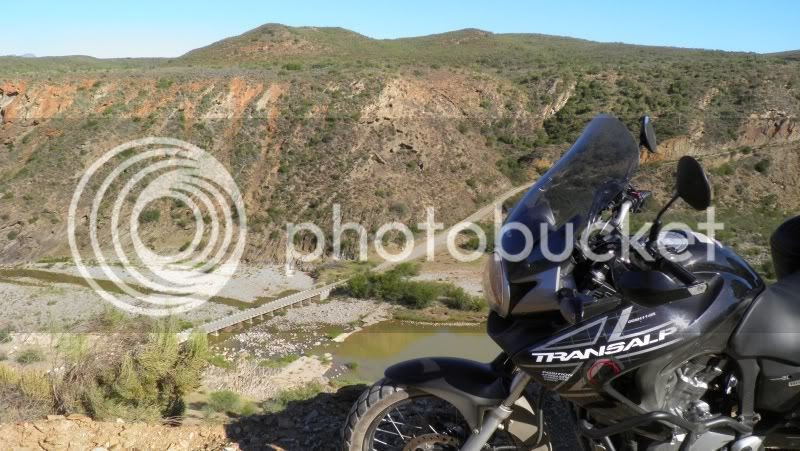 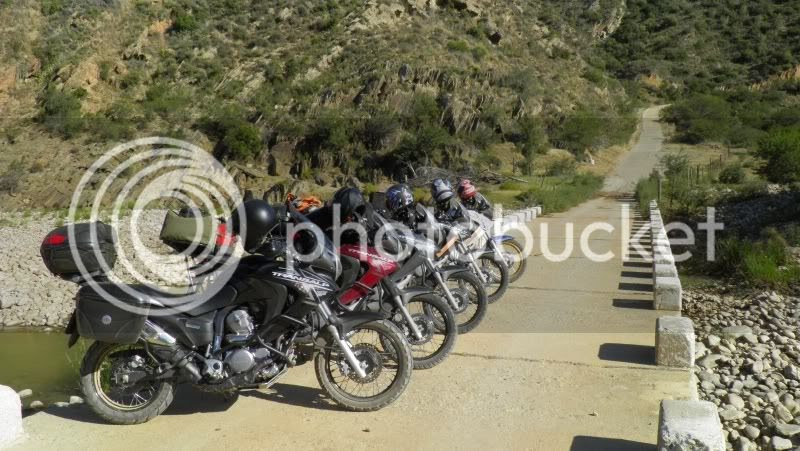 Lots of TransAlp picture shots for the magazine.

The road to Van Wyksdorp: 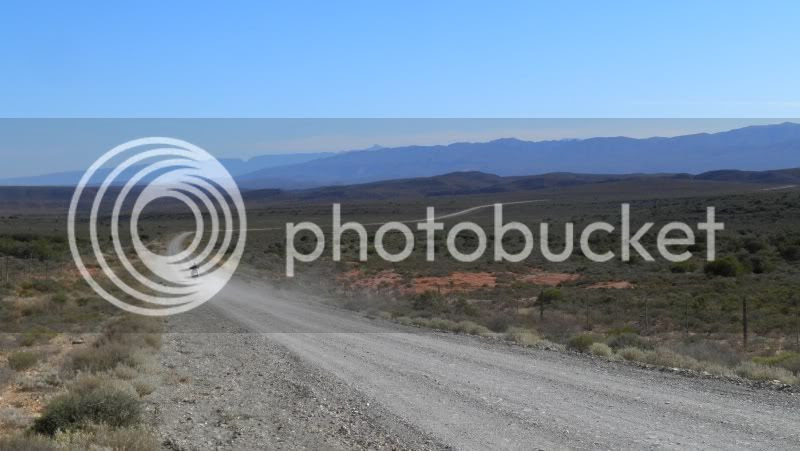 Van Wyksdorp is a town that has been in decline for a while. Now it seems that even the cactus at the town entrance is dying. 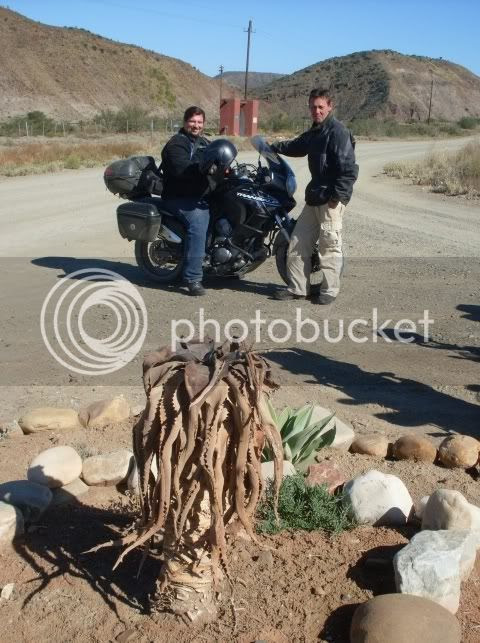 Actually I am happy to report that when we rode into town we found not one, but two well stocked shops doing brisk business on a Saturday morning. Maybe things are looking up again? 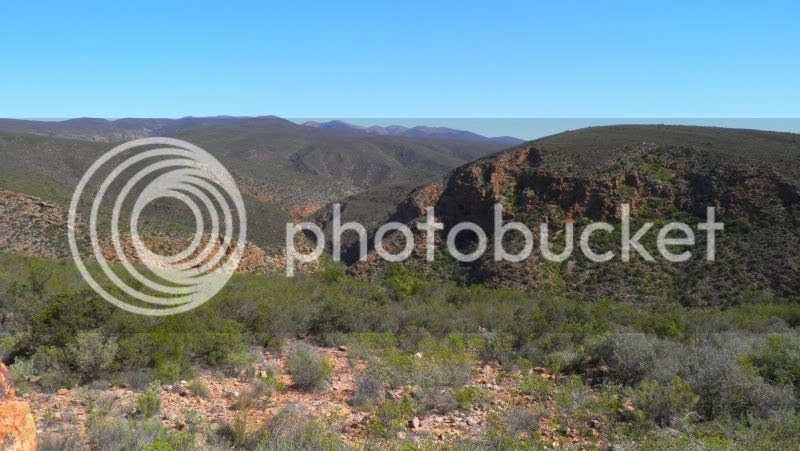 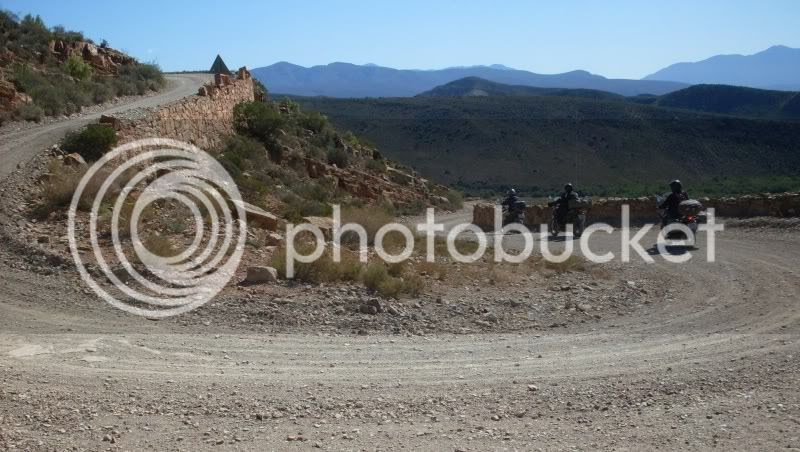 Refuel in Calitzdorp before more gravel to Wilgewandel for lunch. 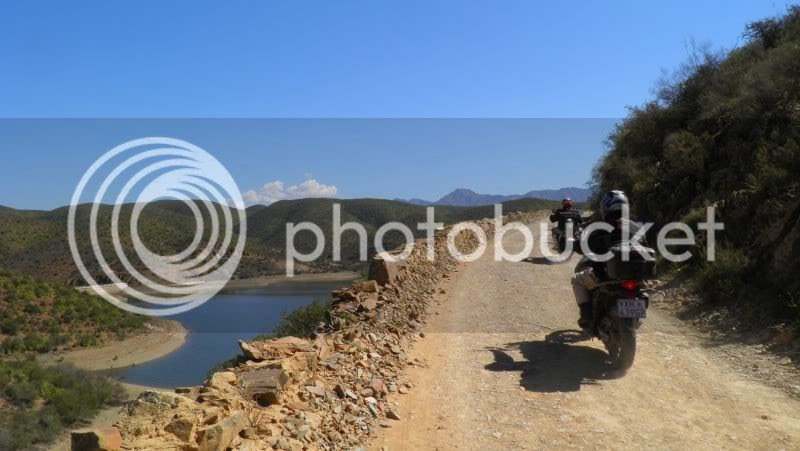 We were riding more and more and stopping less and less for photos. On the last stretch to Louvain (where we slept the second night) Spongebob and I were riding side by side and in front and as it happens we decided to wind it up a bit. We hit the gravel from Oudtshoorn through Kleinspoort and headed South to the Heimersrivier cross where we turned East to follow gravel all the way to Louvain. Now I have to tell you that this road has longs stretches covered with "marbles", especially after the roads have been graded. This particular road seemed like it was graded yesterday...

So as I was saying, Spongebob and I, riding side by side, started pushing a bit. With a rider right next to you you have much less room to maneuver, no room for error. We were flying along that road, over the marbles and through the corners (you can see traffic ahead). Usually I am a slow rider, soaking up the scenery, but today I just wanted that shot of adrenalin and got it! It's an amazing feeling to go into a situation way to fast on a very loose surface with a rider right next to you and knowing exactly what he's going to do and what you are doing. Two bikes in control in an out-of-control situation running in perfect harmony. It's like a symphony. Something to behold. An amazing and exhilarating experience.

And with that out of our system we arrived at Louvain to camp in the Outeniqua mountains. 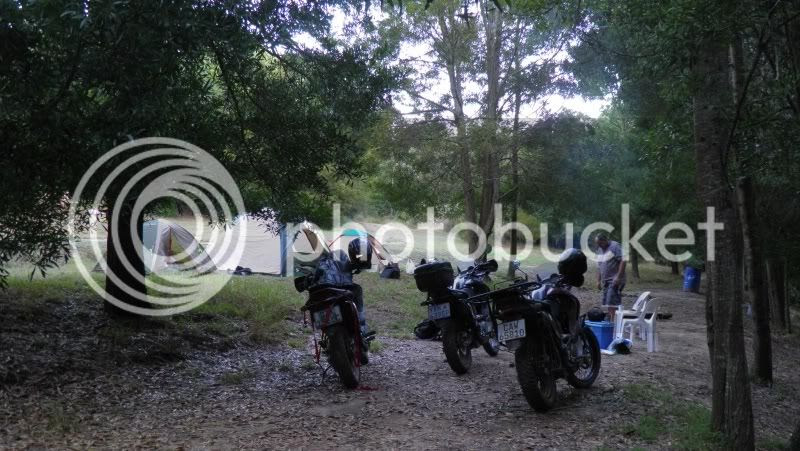 It's my first time at this particular camping spot and had I known about the trees I would have brought my hammock! What a nice spot.

As for myself, I sat around the fire chatting under the stars until about midnight. What a brilliant day. We started off as strangers, we end the weekend as new friends.

The next morning we leisurely pack and head in different directions to get home. As usual my ride home includes Montagu Pass. 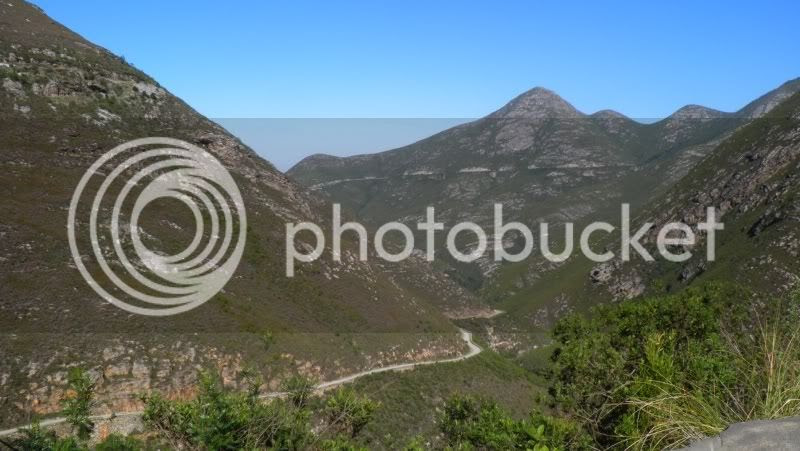 Just a quick picture report of a quick weekend ride. What a beautiful area we live in. After all these rides I still see the beauty. It's like an ever changing canvas.

Honda George will have more rides in future (open to all brands). I'll keep you posted!