Another week, another ride! This time we headed to Wartrail in the Eastern Cape to attend the 2010 Rallye Raid.

The Rallye Raid is a Dual Sport bike event that started four years ago in Wartrail as a KTM only event. It has established itself as a more hardcore event in a time where national events like these tended to become more moderate (and some even "softcore" with tar all the way to the venue).

Also against the market trends the 4th annual event switched from being a branded event to an event open to all brands with the catch line "All brands, No flakes".

I guess Red Cherry Adventures took a chance with an open event like this, but they did a sterling job and the event was a huge success.

But lets start at the beginning. Since the announcement that this year's Rally Raid will be an "open" event there has been a buzz of excitement among the Dual Sport biking fraternity. A buzz that Honda Wing George was quick to pick up on.

Andre (dealer principle and good friend of mine) decided to start working on a plan to get a group of Honda riders together that will ride to and visit the Rallye Raid together. The plan was set. I was asked to help identify riders (nice "lekker okes"

) to make this a ride to remember.

And so it began. We got a group of riders together with XR650's, Africa Twins, TransAlps and even a Varadero to go and tackle the routes on offer at the 2010 Rallye Raid - and I quote from the website:

Rallye Route 1 will be the toughest test and recommended for expert riders. You have been warned.Weapons of choice could be the Yamaha Tenere Honda XR650, KTM 690, KLR 650 and if you are feeling really brave, possibly a KTM Super Enduro or BMW HP2. Distance per day is about 150 km's but don't let that fool you. Knobblies are essential.

Rallye Route 2 will be a mixture of tough terrain, tricky sections and dirt road transport sections. Recommended for experienced riders. +- 250 km's. This is one of the most popular routes and a lot of private farms and some regional roads are used.

Rallye Route 3 will be an endurance route of predominately scenic riding on dirt roads with a few mountain passes thrown in for good measure. +- 350 km's. This could see you explore Rhodes, Otto Du Plessis pass and other great riding areas in and around Wartrail.

Rodeo Challenge. This still consists of various mild to wild skills activities, ranging from slow race to long jump to Barrel racing and a display by some of the best. This event is open to everyone and is always guaranteed a whole heap of fun.


To accommodate all 20 riders in our group w.r.t. departure and arrival times we broke the group into four smaller groups:

Group 1 under arrangement of myself would leave on the Friday morning from Honda Wing George and sleep in Graaf Reinet that evening at the Camdeboo Safari lodge.

Group 2 (XR650's) would also depart from George on Friday and will sleep at Gariep Dam that evening. They would meet up with Groups 1 & 3 in Aliwal North on Saturday before lunch.

Group 3 would leave on Saturday morning very early with bikes and the Honda Wing George Backup Van to be in Graaf Reinet by 8am to meet up with Group 1.

From Barkley East the Honda group would ride together to the Rallye Raid.

On the Friday the a group of riders headed out on a ride to remember! We saw great bikes and riders with crazy skills, lots of "offs", brilliant scenery, had off-the-wall parties

and we returned as friends. 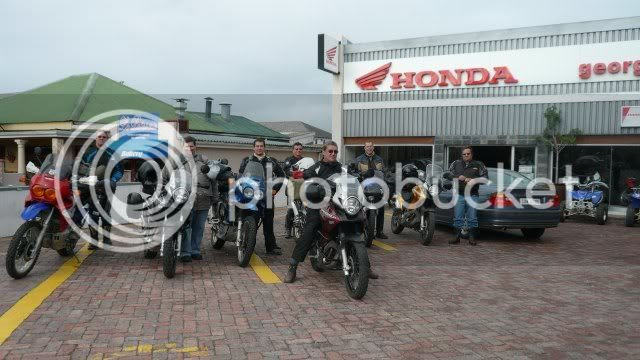 And so the Ride Report begins...

Red Cherry preview of the event: