Trailrider invited me to join him and Letsgofishing on a ride of the Burchell Route. Ride report *here*. 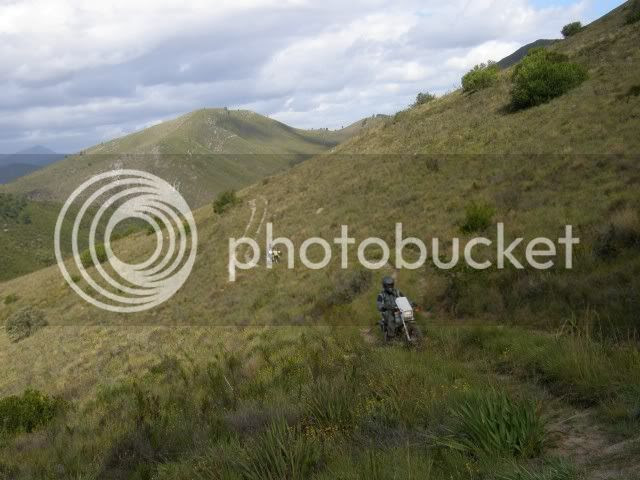 This is a picture from that report.

When I came to write up my part of the report I did a little research on Burchell. I found he had done a big trip of over 7 000 km across the Great Karoo almost to the present Botswana border, down to Graaff-Reinet, Grahamstown and Port Beaufort before returning to Cape Town on the coastal route. It was on that return journey that he did what is now the Burchell Route. I like riding in the Karoo so became interested in following his trek. I had learned that he had written a two volume account of the outward leg of his travels and that they had been reprinted in 1953 & 1967 (only 1000 copies in ’67; fewer in ’53 no doubt). They included a large scale map of his route. I found a copy in a book collectors shop and bought it (making sure the map was included). The map shows the route but it is difficult to translate into current terms since once past present day Fraserburg it was pretty well unexplored country. However there was a good introduction in the reprint from which I learned that Helen McKay had published Sketch Map of Burchell’sTrek in South African Journal of Science in 1943 and had written a four part series about him in Journal of South African Botany in 1941. I went to the S.A. Library to read that stuff. The Sketch Maps were excellent as they showed his route superimposed on a then current map of South Africa so I had not only the town names but also the major roads shown. Fortunately I had taken my camera along so proceeded to photo the 10 maps together with the register of each days travel (not using flash). I had almost completed the pictures when an official noticed me & said it is not permissible to photo in there (apparently you can get photostats at considerable expense & quite a delay). No matter; I had what I needed. 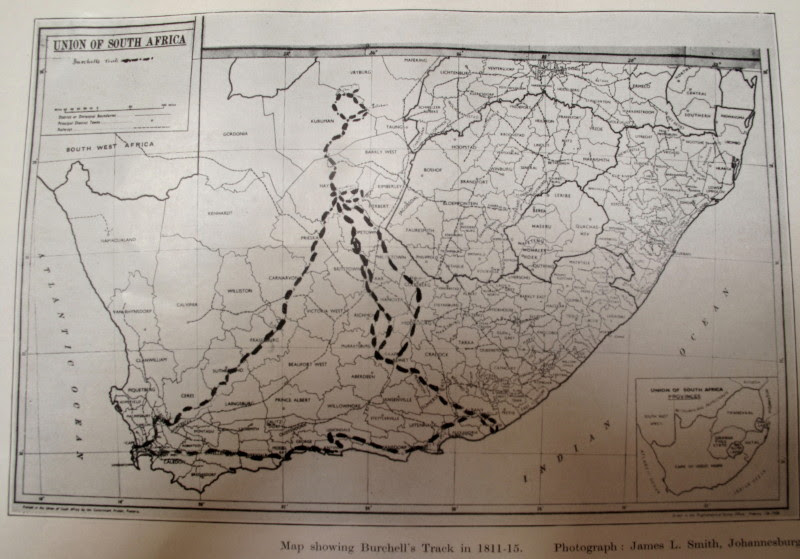 This is a picture of his entire trek. He went up through the Great Karoo to what is now Griekwastad (Klaarwater mission then) Did a hippo hunting trip to Douglas (east) then a long trek down to Graaff-Reinet on horseback to recruit staff for the rest of his trip. A loop north of Griekwastad where he spent some time at Litakun (now Dithakong) which was the ‘capital’ for the local Tswana. Then he went on what I call the giraffe trip up to Heuningvlei and down to Kathu (Sishen) and back to Griekwastad. From there he went down to Graaff-Reinet again but by wagon this time. Down to Grahamstown (not there then: area called Albany) and Port Beaufort. Then back to Cape Town through Uitenhage, Port Elizabeth, Langkloof, Plettenburg Bay and George. That took him from June 1811 to February 1815; he was not travelling all the time as he stayed in Griekwastad and Litakun for extended periods.

I read the two volumes. They are quite big (you can now download pdf versions from Google but that does not include the big map nor the valuable introduction that alerted me to McKay’s useful work). Burchell was a naturalist who collected over 50 000 specimens; largely plants as that was his main interest but also insects, birds and animal skins. A large part of his writing is notes about the plants etc. In 1935 Prof Notcutt extracted the bits about the actual travels and published them as an English Reader for South African children. I got to see that at the S.A.Library and was amazed to find it is a book as small as a A5 week at an opening diary (though the writing is quite a bit smaller than in the original book).

I retraced the trek (but excluded the horseback trip to Graaff-Reinet and back) fairly closely on my TW200. It took me 16 days riding 5 700km.

Burchell includes many woodcut engravings and some large colour plates in his book. I wanted to photo what those same things look like today. We also have a copy of Daniell’s African Scenery and Animals which includes pictures of Litakun (Daniell was there just ten years before Burchell) so I decided to have a sub theme of replicating his pictures also. We also have the books of Schumacher & Le Vaillant’s with pictures of various parts of the route from the same era so I added them to my list. A side plot for the ride.

My report is aimed at others besides the Blog readers – historians and art appreciators may also be interested in parts of what I have to say. I wrote a draft of my Ride Report in the usual day by day style in four sections:

1. A brief report of my ride each day.
2. A report on Burchell’s trek for the same bit.
3. Copies of the pictures with my photos of the same view.
4. Some discussion on topics that arise which interested me.

It is very long so I am now writing a report divided into the major geographical regions with little about my ride, something about Burchell and the pictures with mu equivalents and commentary about them. There were things that I came across that interested me but have nothing to do with Burchell which I have chosen to include.

The report has only been roughed out so it will be appearing sporadically as I get a chance to finish each section, sort out the pictures & upload them. This is going to take time. 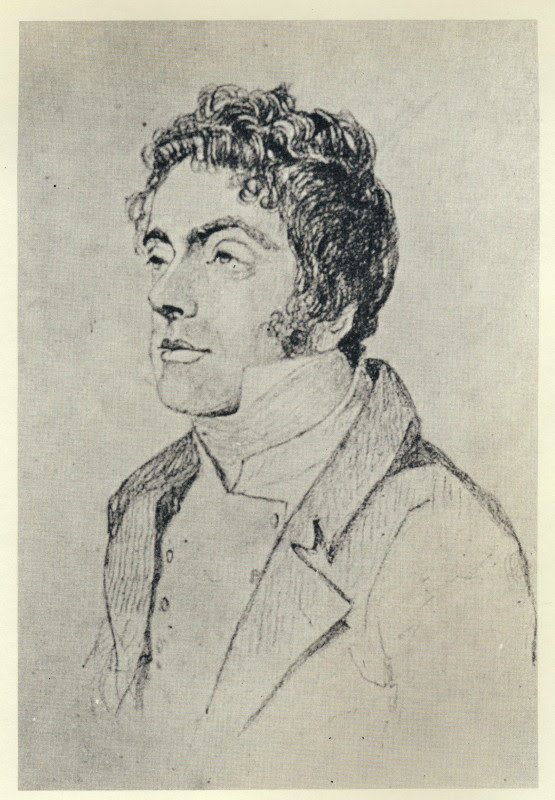 Email ThisBlogThis!Share to TwitterShare to FacebookShare to Pinterest
Labels: Burchell